The work deals with the experiences Hétu had in an earlier life as a weaver. — Vital, Pays-Bas

Joane Hétu is one of veterans behind the Ambiances Magnétiques scene. She appears on many of the releases on this label as well with projects she carried out herself, of course with the help of others. Here with the newest example of it: Filature performed by Ensemble SuperMusique. It took Hétu five years to complete this work. It is an exponent of the Hétu’s projects in the field of music theatre, like Musique d’hiver and La Femme territoire. For this new release we miss the dance and video components. The cd documents only the music and the text. The music is in a serving role for the texts that are declamated and sung in French. The work deals with the experiences Hétu had in an earlier life as a weaver. But altogether it is difficult to make a picture of what this work is about. Only in pieces like Elle travaille, that offers a far echo of the RIO-rock Hétu produced as a member of Wondeur Brass and Justine, Filature becomes accessible for me.

The work deals with the experiences Hétu had in an earlier life as a weaver.

It’s a funny thing listening to songs sung in foreign tongues. Whether it’s the delicate miniatures of Erik Satie or Haino Keiji screaming against the void, there is something lost to be sure but perhaps something else — something not necessarily intended by the artist even — to be gained. Such is the case for the audio tourist listening to Joane Hétu, who has been developing a strong voice as a writer of narrative and a composer of song cycles over recent years.

The simple yet strangely abstract songs that make up Filature were recorded in 2006 and the suite was presented at the 2007 edition of the Festival International de Musique Actuelle de Victoriaville, just a few hours north of Hétu’s Montréal home but it is only now seeing release. The three-part suite follows in the stead of the three discs ofwinter songs” she’s released over the last decade. All of these sets of songs are wonderfully theatrical, in this instance meaning something very different thancinematic.” Hétu’s song cycles aren’t of the sweepingly dramatic form of the big screen but rather exist on small stages in small rooms. She uses large ensembles sparingly and vocal melodies cautiously, evoking (even without benefit of the syntax) dramatic scenes.

Filature is based on Hétu’s work as a weaver when she was young, and indeed was presented with video of looms at work when it was staged at Victoriaville. The metaphor in composition becomes a fairly literal weaving of disparate qualities: of silence and dark, woody tones; of slow instrumental phrases and soft nonmusical sounds; of singing and speaking and less easily classified mouth-made sounds. Saxophonist Jean Derome (like Hétu a fixture of the Ambiances Magnetiques musician collective) delivers much of the text in an unaffected singing voice, plain and almost conversational. In a very different way, Hétu blurs the two, easily sliding between talking and singing.

Hétu benefits from having a group of musicians who know how to read the sentimentality, playfulness and starkness of her work. Along with Derome, the tentet assemblage of L’Ensemble Supermusique heard here includes cellist Mélanie Auclair, bassist Normand Guilbeault, electronicist Diane Labrosse, and percussionists Danielle Palardy Roger and Pierre Tanguay, a strong cross section of Montréal’s pool of improvisers. There is, at times, so little music happening (a bass drone, percussive scrapes and slow, dual voice and violin melodies, for example, or abstract syllabication with occasional horn section interjections) that it seems Hétu must function at least as much as director of actors as she does a conductor of musicians. Part of the success of the work is the company that delivers it.

There is more that could have been done with this release. Bob Hébert’s evocative video work seen in Victoriaville could have been included in a DVD package, and certainly a translated lyric sheet wouldn’t have been unwelcome (the lyrics printed in French are included). But even as it is to an outsider looking in, Filature is a striking and satisfying piece of work. 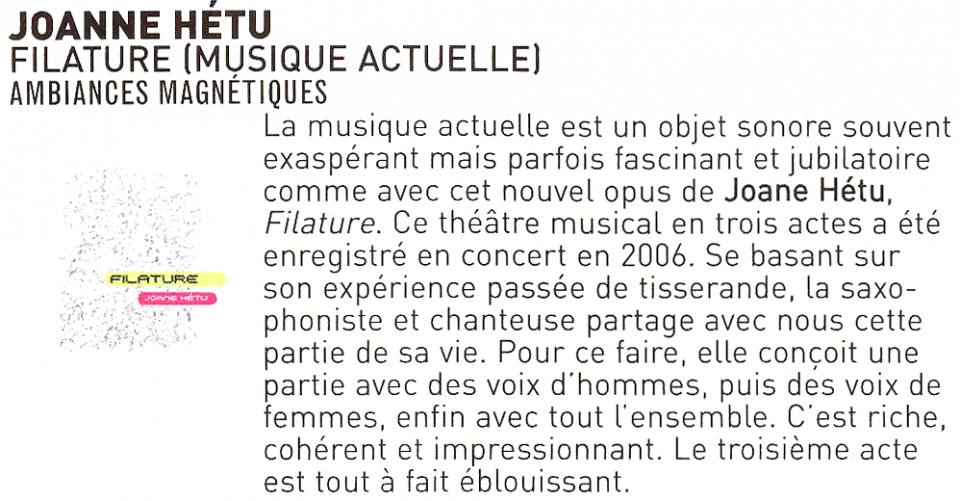