“The Hotel At The End Of The Earth” is not only an unlikely name for a band, but also offers an unlikely music, a mixture of baroque, folk and jazz musics, that is arguably the pure essence of French Canadian music. Well, that is except for the very light-hearted cabaret feel of it all, that feels almost as much 1920’s as 2002. It’s an odd blending of contradictions, and aptly slightly eccentric, notable for its nods to RIO and some nice female vocals.

This is something of a concept album. The liner notes — after a musician’s roll call, natch — begin with a small note from vocalist Marie-Hélène Montpetit about a hotel by the sea, where songs batter against memories of departure. If you’re a victim of the language barrier — the vocals here are all in French — there’s nothing to worry about: the mood is accurately (almost too plainly, given that some tunes come across as being as formulaic as stadium rock) conveyed by the fine playing on show here.

Musically, the album doesn’t break much out of the smooth jazz mode. By smooth, I don’t mean Kenny G: I mean smooth in terms of that laid-back, late-night languor that suffuses many discs. Nobody appears to be working too hard here, but that’s fine in the surrounds; nobody really expects Ketil Bjornstad to be turning all Jerry Lee Lewis on us anytime soon, either. Meditative is the key word; Blues du troisième étage<|b> features some fantastically introspective contrabass work by Normand Guiltbeault that really guides the tune. For the most part, Pierre St-Jak’s piano dominates the tunes. Occasional incursions by guests (L’hôtel… are normally a four-piece, here expanded to eight) add fire and polish to the action — the song Un homme à la mer sounds like mid-era Pink Floyd gone jazz with some fantastic harmonizing — but mostly, it’s the almost-Debussy tones that guide the album. Occasionally, unluckily, it’s towards a slightly soporific destination.

The more lively tunes here bring to mind John Zorn’s Masada work; Réparitition des tâches certainly wouldn’t have been out of place on the Bar Kokhba album, for example. It’s a shame that the ensemble doesn’t stretch to this sort of rapture more often; sure, dour and moonlit is nice, but there comes a time when what’s really needed is a bit of fire-fuelled gypsy violinist dancing. It’s something that seems more necessary as the album moved on: the more the piano tends towards angularity, the more I craved reckless release, only to be denied it — a shame.

Overall, Chant des adieux, chant de la solitude is a classy affair. To be brutally superficial, for those who don’t speak French, it’s a good background disc with enough slow-burn jazz listenability to see you through a couple of bottles of wine. It’s a bit Windham Hill at times, but if you’re able to worm your way past the “Where’s Ute?” feeling, investigation will reap rewards. Not an album for all seasons, but one that I can see getting more than a few revolutions in the late evenings around my way. 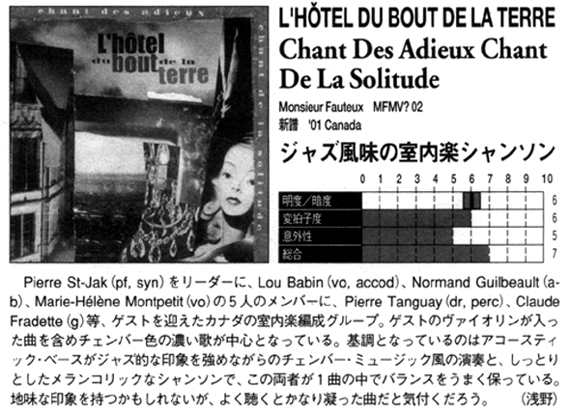 Three new cd’s on Ambiances Magnétiques and new sublabel Monsieur Fauteux…. Most of the time releases on this label have the newest output from well known artists like Derome, Lussier, Duchesne and others. Although this are often releases of considerable quality, I’m happy that this time we have three new cds from groups of the ‘next generation’.

What new talents do we have here? In general the most striking difference with the first generation is that these bands are more rock-orientated. This is also the the case for Papa Boa (1999). Especially with Interférence Sardines and Rouge Ciel we enter a new chapter in the kind of art-rock that Henry Cow developed in the 70s. This kind of rock music flourished in the first half of the 80s with bands like Univers Zero, Samla, Debile Menthol, and many others. But creativity came to end and boring music like that of Art Zoyd was what was left. Since then I have been waiting for new bands to pick up were many ended in the 80s. But listening to Interférence Sardines it became clear to me that we have a new creative outburst here. Let me present the bands in more detail. Interférence Sardines is a quintet: Andrée Bilodeau (violin, alto, voice), Sébastien Doré (electric bass, clap, voice), Marc Gagnon (violin, electric violin, voice), Fréderic Lebrasseur (drums, percussion, piano, voice) and Philippe Venne (guitar, piano, voice). Assisted by four guests. Most pieces are composed by Philippe Venne. Their second cd Zucchini is a very nice piece of work. Their music can be compared in a way with that of Debile Menthol, a famous swiss group from the 80s. Complex art-rock mixing rock, jazz and contemporary in a nice blend of composition and improvisation. The music is full of surprises. The playing is very tight and convincing.

Rouge Ciel is a quartet: Guido del Fabbro (violin, mandoline, pick ups), Simon Lapointe (piano, claviers, melodica), Antonin Provost (acustic and electric guitar) and Nemo Venda (trumpet, drums, percussion). They debute here with a fresh mix of rock and improvisation. They do not reach the creative level of Interférence Sardines, but it still is very good music. Both bands I can recommend to anyone who like - I don’t know a better name - art-rock bands like Curlew, 5uu’s, etc. L’hotel du Bout de la Terre is the more conventional one of these three bands. No new territories here. This group was started in 1995 by Lou Babin (accordeon, voice ), Marie-Hélène Montpetit (voice), Pierre St-Jak (piano), and Norman Guilbeault. On this cd they are assisted by guests like Claude Fradette (guitar) and Pierre Tanguay (drums, perc. ). They present a collection of 12 songs composed by St. Jak and Montpetit. Melancholic and impressionistic songs. Texts written and sung by Montpetit. Although this may be a relatively new group someone like pianist Pierre St-Jak is a veteran of the Montréal jazz scene. Personally I never liked his piano playing very much which can also be heard on this one.

… listening to Interférence Sardines it became clear to me that we have a new creative outburst here.