Glen Hall has organized the annual 416 Toronto Creative Improvisers Festival since 2001. Guests from the 514 area code were welcomed last year, with Montréal turntablist Martin Tétreault’s sounds most unique. Live • 33 • 45 • 78 (Ambiances Magnétiques AM 191 CD), a duo with Berlin-based turntablist Ignaz Schick, provides examples of these jangling and ratcheting textures. Unlike hip-hoppers who use LPs to insert song snatches or scratch beats, the Canadian-German duo manipulate tone-arms and cartridges as additional sound sources, while pummelling electrified surfaces for distinctive timbres. In two suites they mix granulated rubs and rattles, sharp rugged smacks and motorized rasps with beneath-hearing-level clatter and hisses to reveal textures ranging from stallion-like whinnies to forte ostinatos replicating a dentist’s drill. By the climax of Cave 12 they create a double-counterpoint showcase. The piece weaves vinyl needle rips, frenzied buzzes, static vibrating, video-game-like clanking and near-human cries into a neat package of harmonic interface, as multi-textural as it is percussive. 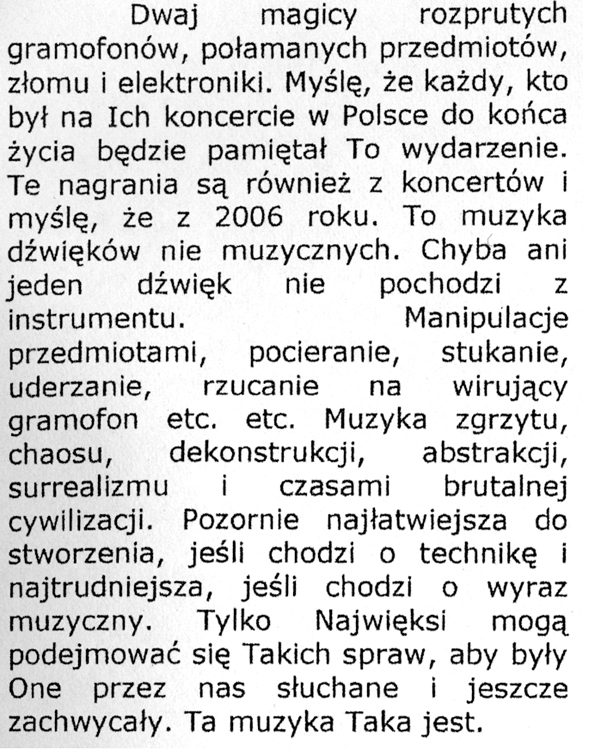 While the dynamics and textures range widely, the activity is fairly incessant like a hive of mechanical insects scurrying about their daily tasks.

Live • 33 • 45 • 78 is a collaboration of two beyond-deconstructionist turntablists: the Canadian Martin Tétreault and the German Ignaz Schick. They’re well past the idioms marked by the ‘broken music’ approach or Christian Marclay - their sound comes from the machine itself, removed from vinyl + needle friction. Schick is the younger of the two, but has honed an improvisational approach with Charlemagne Palestine and Don Cherry, while Tétreault has played and recorded with, as well as influenced many in the field of modern creative or improvised music such as Otomo Yoshihide and Jean Derome. Here, a pair of 2006 live performances from Belgium and Switzerland document the duo seizing from their machines sounds which are then forced to move in three tempos - quick, quicker, quickest. The disc gurgles, buzzes, and oozes across the aural spectrum.

The disc gurgles, buzzes, and oozes across the aural spectrum.