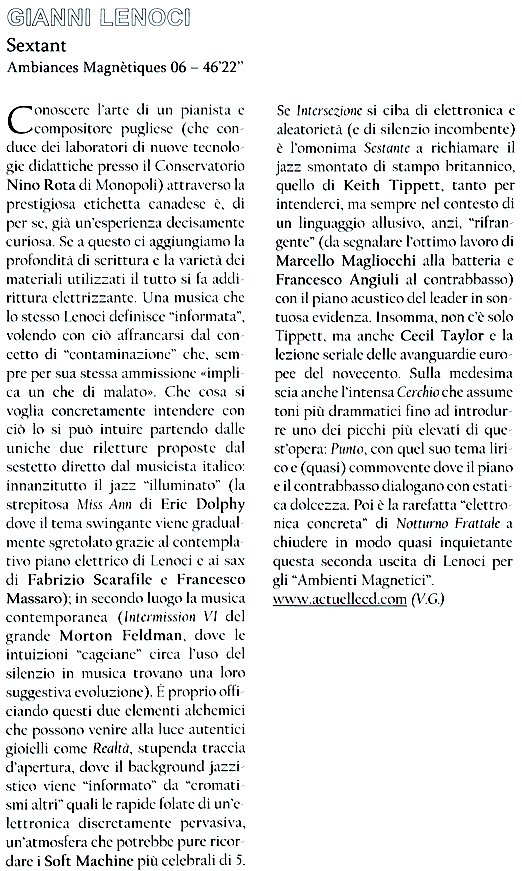 Sextant — the second release by Gianni Lenoci on Ambiances Magnétiques — was born out of the new teaching methodologies’ workshops given by the Italian pianist at Nino Rota Conservatory in Monopoli. Lenoci’s experiments cover a large musical territory in which jazz draws inspiration from contemporary music. Acoustic and electronic instruments meet in harmony to form a highly dynamic whole. Here is how the artist explains his approach: “For years now, my main focus has been to try to create music that is not ‘contaminated’ but rather ‘informed’ and intelligent. Multiple and multifaceted music, yet coherent music nonetheless. Organic music made with gestures shedding light on the unclassifiable areas of language.”

Montréal’s Ambiances Magnétiques has released some 169 records since 1984 with a pretty remarkable batting record. The original members of the collective (including Jean Derome, René Lussier, Martin Tétreault and Danielle Palardy Roger) have for the most part continued to do challenging work, while younger musicians have been brought into the fold.

Tim Brady is a talented guitarist with a rockish sensibility and plenty of jazz chops. He loves his instrument the way Jasper Johns loves paint: thick and apparent. His 2002 release Twenty Quarter-Inch Jacks was, in that sense, wholly satisfying. As is, in a certain way, his new offering, GO. It’s diverse, it’s raw, it’s pretty, it’s precise. Four compositions of his own and four by others, all strong but as a whole uneven. The disc feels as if Brady is trying to show off many approaches and styles he can pull off. And pull them off he does, so well that it sounds as if it could be a compilation album.

Likewise pianist Gianni Lenoci’s wandering sextet record Sextant. At center, the group is a traditional enough line-up of keyboards, guitar, bass, drum and two saxophones, although the keyboards and guitars are sometimes electronically augmented. Two tracks not penned by Lenoci are Eric Dolphy’s Miss Ann and Morton Feldman’s Intermission VI. Lenoci’s pieces seem to follow the two worlds, skipping between minimalist and jazzy pieces, generally strong tracks, but ultimately seeming to be more a display of diversity than creating a unified feeling.

The same charge could be leveled against clarinetist Lori Freedman’s new CD, culled from three nights of live performances with different trios. The difference here is that the record is exceptional regardless of her motives. A set with guitarist Lussier and turntablist Tétreault is a fascinating, warm rumble. A matchup with saxophonist Derome and guitarist/percussionist Rainer Wiens is strangely moody with touches of spaghetti western. And with percussionist Roger and bassist Nicolas Caloia she explores quiet, extended-improv techniques and jazzier explorations. Despite the different sources, the album holds together surprisingly well.

A different sort of project is presented on the guitar duet by Arthur Bull and Daniel Heïkalo. It’s the sort of bashing-of-minds improv one would expect to find, at this point, in clubs and cafés around the world — busy, sometimes riotously so, and introspective, as if some personal space is being invaded simply by listening. Whereas the other discs ask to be listened to, Bull and Heïkalo seem forever to be changing the subject because a listener walked in.

Sextant is the second cd by this Italian composer and improvisor for Ambiances Magnétiques. In 2003 he recorded a cd of improvised duets with Joëlle Léandre. Now he returns with a totally different multifaceted album of nine compositions for a small ensemble. They originated from workshops given by this italian pianist at Nino Rota Conservatory in Monopoli, where he worked with new teaching methodologies. Most compositions are by the hand of Gianni Lenoci himself who graduated from Santa Cecilia Conservatory in Rome and studied improvised music with Mal Waldron and Paul Bley. They are performed by: Adolfo Lavolpe (electric guitar, electronics), Fabrizio Scarafile (soprano saxophone), Francesco Massaro (alto & baritone sax), Francesco Angiuli (doublebass), Marcello Magliocchie (drums) plus Gianni Lenoci himself on (electric) piano, synthesizer and electronics. In the centre of this cd however we hear a work by Morton Feldman: intermissionVI. A piece very close to silence. Tense and breakable. It is as if we are in the centre of a hurricane with this meditative piece, as most other pieces before and after are much more loud, jazzier, etc. intermissionVI is preceded by rothkovariations a piece that is about sound and texture with lots of electronics, plus piano and reeds. The second piece of this album intersezione and the last track of this album notturno frattale are both very otherworldly electronic-only pieces, that are absolutely non-jazz. Most other pieces are very free jazz like works that share similarities with the music of Ornette Coleman of Shannon Jackson. They catch attention most of all because of the very strange combination of odd electronic sounds combined with saxes, drums, etc., like in the opening track or in the title track. The works differ enormously in style and character. I wonder what the underlying musically unifying concept is for this album, if there is any. But of course there is nothing wrong with showing very different faces.

Montréal’s Ambiances Magnétiques has been busy with releases as of late — see new outings by Tim Brady, Lori Freedman, as well Arthur Bull & Daniel Heïkalo for evidence. Now you can enter Gianni Lenoci: an Italian pianist with an impressive touch.

The piano leader has recruited some finely plucked Italian musicians for this oeuvre, which travels nine selections of extremely diverse territory. As the story has it, these tracks were born out of the new teaching methodologies’ workshops given by Lenoci at Nino Rota Conservatory in Monopoli. But just when you start to think most of this collection is centered around Lenoci’s subtle piano meanderings, a track like Intersezione, or better yet Notturno frattale, neatly tuck away those pre-conceptions with nearly 6 minutes of electronic-based shrieks and tonalities, both far away from conventional jazz instrumentation.

Sextant (which I can only guess signifies the number of musicians involved) is Lenoci’s follow-up to Sur une balançoire, also released on Ambiances Magnétiques back in 2004. And this new album takes a lateral sprint from its predecessor.

For lack of better expression, Sextant is “all over the place” — and without a real unified vibe (except, of course, for the “everywhere” factor). The open-minded combination of electric and synthesized keys, electronic blasts, soprano & alt saxophones, double bass and drums results in some fairly eccentric flourishes though. For example, a subtle piano jazz moment can suddenly become intercepted by some manic energy — where various instruments seemingly bubble for distinctive air.

Created with purpose and intent, this is a rather interesting headphone / full sound system experience (though the high-pitched shrieks scared the lights out of me, as they always do). It’s up to you whether or not its disjointed visions merit repeat listening.

Mixing modal, minimalist and avant-garde impulses, the pieces on this CD stem from teaching methodologies workshops Italian pianist Gianni Lenoci leads in his hometown of Monopoli. But there’s nothing fussy or academic about the date.

Taking jazzman Eric Dolphy’s buoyant intensity and composer Morton Feldman’s horizontal sound development as its contrasting boundries, the Lenoci sextet not only plays a composition by each man, but also original tunes that bound from one extremity to the other, sonically coloring in the often elusive middle distances.

Louder and more boppish, Punto showcases Massaro’s swaggering baritone saxophone growls on top of organic keybaord comping, while Rothko flirts with electronics. Except for an occasiomal cymbal clap from Marcello Magliocchi and slurping chirps from the saxes, this piece is all Lenoci, who outputs broken chord cadenzas and cascading arpeggios that expose internal string slides and ring modulator- triggered gongs.

With bassist Francesco Angiuli on side to keep the band grounded during the more traditionally jazzy and electronic compositions, the composer/pianist confirms that fluent improvisations can arise from cerebral forethought as well as in-the-moment playing.