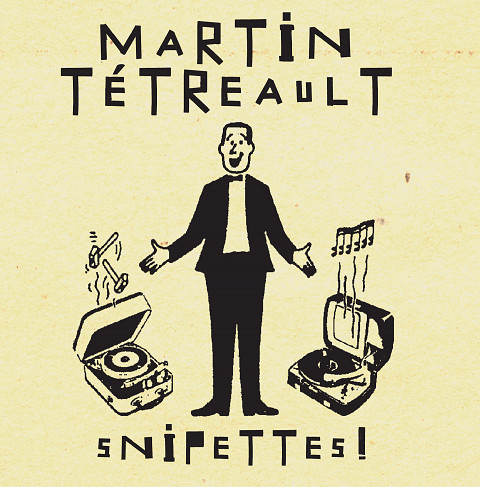 anything Tétreault does is of great interest — Hour, Québec 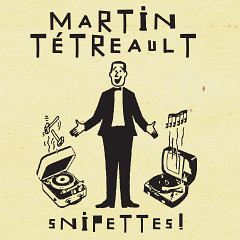 Since this is the first post on a currently-unknown blog that most future readers most likely won’t return to, I’ll keep introductions to a minimum before getting onto the music. This blog is an extension of my radio show on WHRW 90.5 FM, also called Meshes of the Afternoon. Because I have no access to college radio during summers and breaks, and because I can blather on about music a lot more online than I can on the air, I’ve given in to the tidal wave of music blogs to help me pass the time.

To celebrate the beginning of something new, here’s a selection off turntablist Martin Tétreault’s new release, Snipettes! The cd, released this year by Canada’s greatest avant-garde record label, Ambiances Magnétiques, collects tracks recorded between 1984 and 1990. The two suites here, Snipettes! and Morceaux Choisis, were first released together in 1992 as a limited edition cassette in a run of 250 copies. While not completely unheard by audiences until this year, Snipettes! is, for all intents and purposes, a lost recording that has languished in the AM archives until now.

Tétreault made his name a few years prior with 1990’s Des pas et des mois, recorded with René Lussier and Michel F Côté. Though Tétreault has moved onto a vinyl-less style of playing the turntable, working only with the noises produced by the mechanism itself, these early recordings expand on the work of Christian Marclay in their reckless experimentation and sometimes outrageous sense of humor. Gagarine, USS Enterprise and a Cosmic Peddler is a piece “scored” for turntable, featuring samples from a kitschy organ and bongos record, a Hammond instructional lp, early electronic music, and the voices of William Shatner, Eddie Paskey, and Leonard Nimoy for narration (who reappear regularly throughout the album).

This recording starts with a countdown to blastoff, which morphs into a news report of Yuri Gagarin’s first trip in a spaceship, then a rendition of The Tennessee Waltz, a snatch of dialogue from Star Trek and a sales pitch for a how-to guide to playing the organ. That’s just the first minute or so of this very witty travelogue through the fevered recombinant imagination of Martin Tétreault. Snipettes! began life as a 250-copy limited edition cassette in 1992 and is now being reissued on its 15th anniversary, and if you missed it the first time around, you don’t have an excuse now. Then, as now, anything Tétreault does is of great interest.

anything Tétreault does is of great interest

This reissue of what was previously released as a limited edition cassette is perhaps one of Tétreault’s best works! Snipettes! consists of 22 short pieces and one long piece (31+ minutes), all recorded between 1984 and 1990. These pieces come from early in the music career of Québécois turntablist, Martin Tétreault. At this point, Martin was using two turntables, one mostly featured an album by Eddie Osborne called Baldwin Organ & Bongos, while with the other turntable he samples records on modern classical and musique concrète. He also used tape recorders and a shortwave radio. The recorded voices include Russian cosmonaut, Yuri Gagarin, William Shatner & Leonard Nimoy in their Star Trek voices, plus a variety of French actors. Records by Varèse, Luc Ferrari and the New York Jazz Quartet are utilized. Each piece gets a partial page in the enclosed booklet explaining where the sample is taken from and sometimes there is more info then the sounds we hear on the CD. What I find most charming about this disc is that it sounds like an artifact from a long lost era when folks just used turntables & records, before there were samplers.

perhaps one of Tétreault’s best works!

Listening more to Tétreault’s Snipettes record. As I mentioned the other day, this is a reissue of a very limited set of 1992 cassette tape releases. To me, this is far more interesting than the more recent noise improv that Tétreault has been involved with. Here he created a virtual orchestra from a set of records. The title piece is my personal favorite, an unusual but wonderfully paced set of plundered parts, including Star Trek voice samples from actors other than Shatner and Nimoy, but more importantly, using a very eclectic mix of virtual instruments. It’s clear from listening to both works that Tetreault put a lot of careful consideration into the selection of source material and how the pieces were to be performed. It’s both remarkable and really entertaining. And inspiring me to play a lot of plunderphonics material on the radio show today…

The title piece is my personal favorite, an unusual but wonderfully paced set of plundered parts…

Montréal-based sound artist Martin Tétreault is a complete turntablist. He understands the vinyl player’s anatomy like a gifted surgeon, having crafted sounds and forcefully extracted noises from those golden spinning machines for well over 20 years. But Snipettes! and the accompanied Morceaux Choisis offers a different (and much appreciated) retroactive look at the artist’s utterly outstanding sampling chops.

Initially released in 1992 in the cassette format (limited to 250 copies), Snipettes! and Morceaux Choisis (two seemingly separate projects on the same disc) are absolute joys to discover. Offering more of an honest separation from Martin’s more experimental works, Snipettes! is the golden prize here, with its familiar repertoire sampled from one singular album: Eddie Osborne’s Baldwin Organ & Bongos from the Audio Fidelity label (a cheeky 60s record New York’s WFMU seems to spin all the time as background material). With its rather simplified cheeseball organs and powder room percussions, the album— sampled and shred to pieces in the midst of the sample debates of the early 90s by Tétreault — is a pure sugar spun delight. Heck, I think I’ll throw this on the player alongside Nino Rota’s La Dolce Vita during my next ultra hip supper party. Snipettes! is a true slice of life.

The second half of the release, officially titled Morceaux Choisis 1984-86, is an earlier compilation of experimental works mostly founded on Tétreault’s intuitive stylings, still somewhat primitive par rapport to his current positioning as a masterful turntable manipulator. However, this also proves wildly inventive and joyful with exquisite titles like “Bien-Être Extra-Ordinaire” and “The Political Kurtzweil on the Market” (a track Martin explains as being “a floppy record sliced into four equal pieces and reassembled”). Furthermore, its use of musique concrète serves as a direct polar opposite to the first half’s kitschy sounds.

Tétreault is nothing short of a sampling king in my book, with a wildman technique all his own. And this album easily rivals all works by his pal Kid Koala. It just might be a little cassette classic, coincidentally, much like Koala’s Scratchhappyland.

This cassette must be Martin Tétreault’s rarest album. It came out in 1992, in Ambiances Magnétiques’ short-lived series “Archives Magnétiques,” in a limited edition of 250 copies. At the time the turntable wizard was still widely unknown outside the province of Quebec and had only one album to his credit (Des pas et des mois, 1990). In two continuous suites of 20 minutes each, Tétreault rummages through his record collection to find the weirdest pieces of pressed petroleum. Citations, strange confrontations, and medium destruction come together for pure enjoyment of the ears. In 1992, Tétreault had not yet pushed his art below the record to work in the turntable’s insides, but he was cutting up records to paste unrelated pieces together and using creative skipping techniques. In Snipettes, the cast of the original TV series Star Trek (Spock: “I have never heard anything quite like it”), a Time-Life collection on the space race, a muzak rendition of “South of the Border” and various records of classical and electronic music (including the infamous Perrey & Kingsley trilogy) form a twisted narrative. In “Morceaux Choisis” excerpts from self-help records (psychology, relaxation and such) provide a loose structure for noise-based improvisations and a feature for glued LPs. The narrative contents of this piece will be lost on English-speaking listeners, but the English samples and the type of humor found in Snipettes can appeal to a wider audience (even the non-experimental type). Let’s just say this cassette presents Tétreault at his most irreverant.

This cassette must be Martin Tétreault’s rarest album! Let’s just say this cassette presents Tétreault at his most irreverant.