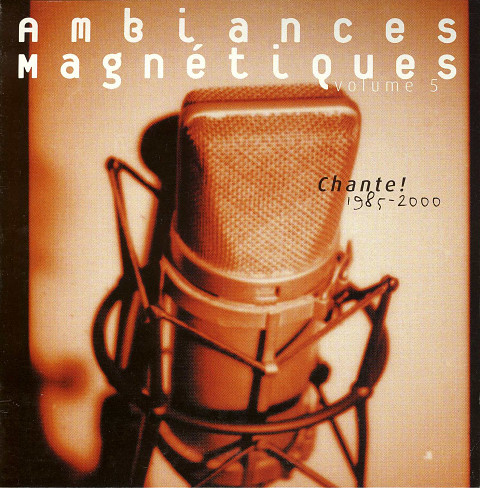 Beautifully packaged, an aid for the linguistically challenged, and an open invitation, to… chante! — Hour, Québec 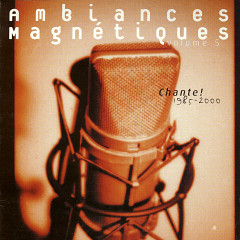 As the title suggests, a set of vocal performances, 18 in all, from the last 15 years of the remarkable Ambiances Magnetiques crowd. One normally associates musique actuelle with avant-garde work in the area between contemporary classical and jazz, but this group of songs comes mainly from the Québécois folk tradition. And if they aren’t classics, pieces like La bombe (Les Granules), Esti qu’est belle ta peau (Nathalie Derome), Trains, Trains (Andre Duchesne) and. P’tit pain (Jean Derome and René Lussier) should be. Beautifully packaged, an aid for the linguistically challenged, and an open invitation, to… chante! 4/5

Beautifully packaged, an aid for the linguistically challenged, and an open invitation, to… chante!

Unexpected and quirky songwriting make up the singular assembly of tracks on this compendium. The French-Canadian art-pop gems here are strange and wonderful approaches to songwriting by artists largely of the Montréal electro-acoustic scene known for tape collages and musique actuelle. Here they produce experimental Arcadian folk songs, bizarre transmogrifications of French pop and more. Among the artists present are Pierre Tanguay, René Lussier, André Duchesne and more. (4. 5)

… art-pop gems here are strange and wonderful approaches to songwriting…

I can honestly say that Chante! is a thoroughly charming recording. “Charming” isn’t an adjective I often use in describing stuff from Ambiances Magnétiques. Esoteric? Yes! Provocative? Yes! Imaginative? Yes indeed! Oddly enough, though, the result of compiling these individual tracks from eighteen distinct AM releases is such that I can only describe it as “charming!” The cast of characters is familiar to longtime Splendid readers: René Lussier, Jean Derome, Joane Hétu, Pierre Tanguay and others. Each track seems to have been touched by many of the same hands, yet each is quite distinct. Some are jazzy, some are folksy, some are bluesy, some are atmospheric, and all are clever and creative. But while a whole album of any one of these styles might leave me feeling oversaturated, in this more limited context I find myself both enjoying the current track as well as eagerly anticipating what will come next. If I had to pick a favorite piece, I’d go with Les Granules’ excellent, tongue-in-cheek La bombe.

This CD is a compilation of 18 songs from the Ambiances magnétiques repertoire, dating from 1985 to 2000. It highlights the various style of musical compositions that is available from the label. The main attention of this volume is on the French-Canadian song writing. With other words various kinds of songs we can find from fun music, rock and roll, chanson towards experimental. And the language is French, beside of one number. There is an atmosphere that surrounds this CD. An atmosphere that only French music is able to make. Or is it the precious choice of music on the CD. It feels as you are in a dark smoky pub and the singers passes one by one the review. Precious music from which the texts you can find in the booklet.

The second disc commemorates 15 years of song on the Ambiances magnétiques label. Chante! collects 18 previously released tracks by the likes of Diane Labrosse, Nathalie Derome, Michel F Côté, René Lussier, Papa Boa, Les Granules and a host of others who have demonstrated that the avant-garde and traditional songwriting have ample room in which to mingle. The compilation is an eclectic mix of styles and genres (feel free to put an presumptuous “avant-" in front of any the following terms: rockabilly, popular, jazz, big band, blues… you name it and it’s here). Peculiar, funny and spirited, this is a vibrant compilation that will surely be welcome by anyone interested in turning songwriting traditions on their heads.

NB: Unfortunately, the only problem with both of these releases is the lack of translations. Of course, providing a translation might defeat the purpose of most of this music, but at least some context would have helped a listener like me, whose french language skills are lacking the versatility and fluency necessary to understand the compressed idiom of these lyrics. The lyrics obviously pique my curiosity and so I end up spending half my day wrestling with what little french I know, studiously bent over my dictionaries. That being said, much of this music will be lost on those lacking a working knowledge of french, so buyers beware.

Peculiar, funny and spirited, this is a vibrant compilation that will surely be welcome by anyone interested in turning songwriting traditions on their heads. 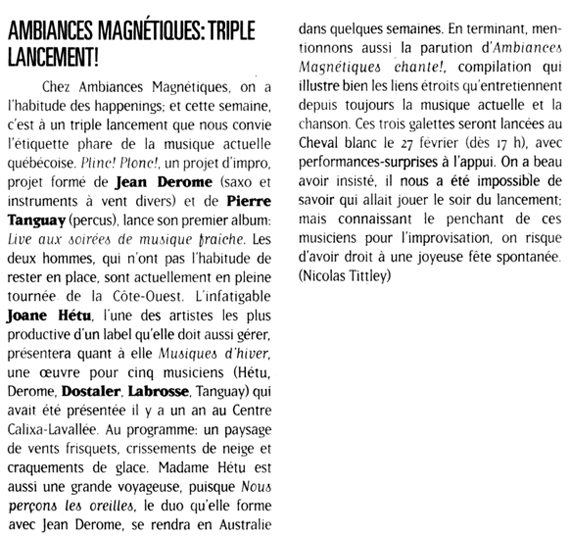 From time to time Ambiances magnétiques gives light to a compilation-cd. On this volume 18 different pieces are collected and are a good introduction for those who want to discover this beautiful label. Pieces by Duchesne, Papa Boa, Labrosse, Tétreault, Lussier, Côté, and many others should attrackt you

… a good introduction for those who want to discover this beautiful label.

The production of the Montréal record label Ambiances Magnétiques always oscillated between avant-garde song writing and free improvisation. The former was very important in the early days (1985-1990), later left aside (during the mid-1990s) and finally regained interest at the turn of the century. Ambiances Magnétiques, Vol. 5: Chante! 1985-2000 compiles songs from a broad range of artists on the label and presents them in a comprehensive and exciting way. Although this CD is made of all previously available tracks (two were still unissued on CD: the Wondeur Brass and Les Poules selections), special care has been put in the running order, which makes it enjoyable as a whole. The label had to stretch the definition of the song format a lot to find enough material, though. Selections from Wondeur Brass, Justine, Papa Boa, André Duchesne and Joane Hétu are all strong avant-rock songs. The more classy contemporary song stylings of Pierre Cartier and Geneviève Letarte bring a pensive touch to the ensemble, but one can question the presence of more atmospheric or improvised pieces like Diane Labrosse’s Constellations and Liberté, or Martin Tétreault and Michel F Côté’s Juin. All lyrics are sung in French of course, but in most cases they are not essential to the comprehension of the music itself. Ambiances Magnétiques, Vol. 5: Chante! 1985-2000 does not bring anything new to the table, but it reminds us of the label’s commitment to song writing and makes a good introduction to the more accessible portion of its catalogue.

Vol. 5: Chante! 1985-2000 compiles songs from a broad range of artists on the label and presents them in a comprehensive and exciting way.