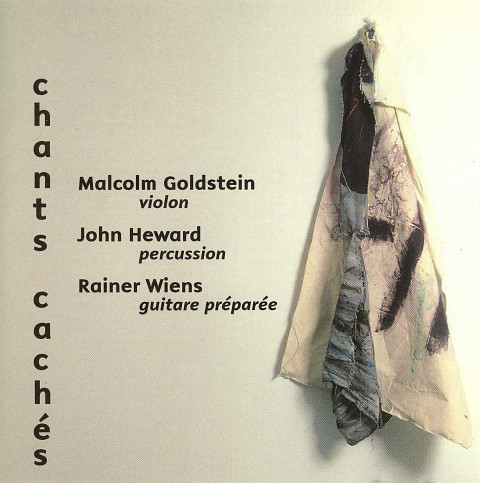 The trio features all the qualities expected from an experienced free improv outfit… — AllMusic, ÉU

Wiens’s interplay with Goldstein and the inventive textures he adds… are what make such absorbing and rewarding listening. — Cadence, ÉU 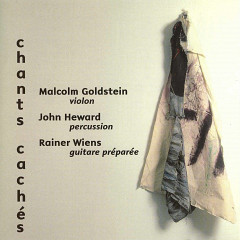 Violinist Malcolm Goldstein, drummer John Heward, and guitarist Rainer Wiens had been playing together for five years or so when they recorded this first album in the studios of Radio-Canada, Canada’s French-speaking public radio. The trio features all the qualities expected from an experienced free improv outfit: synergy, listening capacity, compatibility in the choice of techniques. Goldstein’s signature is the most prominent one on Chants cachés (Hidden Songs). That is not to say that he leads the trio, but he has a way of setting the mood. His very personal vocabulary finds remarkable echoes in Wiens’ prepared acoustic guitar. Heward adapts his playing to the other two, using mostly his cymbals, his scrapings joining in with violin and guitar. The music is delicate, textural, inhabited by a restrained energy that only makes it more intense. Just listen to Heward keeping Trio 3 alive while the other musicians take a few steps back in order to leap farther. Chants cachés is an unlikely release for the Montréal label Ambiances Magnétiques — it was their first CD of acoustic free improvisations. Considering how Wiens’ work is so under-documented, one can’t help but be grateful.

This is a remarkable account of three improvising musicians recorded over four days in November 1997, but a much longer period of musical exchange has shaped the interaction of violinist Goldstein, percussionist Heward, and prepared guitarist Wiens. The six trio pieces and two duets by Goldstein and Wiens are improvisation in its purest form, reminiscent at times of some of the quieter editions of John Stevens’ Spontaneous Music Ensemble. Heward mentions in the notes that when “I think of and make improvised music I have images of water somewhere in and out of mind," and that will serve as ideal point of entry to this music making. It is, above all, fluid, making its own course, absorbing other materials, progressing at the rate that the terrain allows. But it is also its own terrain, with figure and ground never absolutely defined. Also elemental, it is so insistently engaged in time that it becomes effectively timeless. Like all good improvisation, it is utterly distinct, each piece and each voice necessarily itself, but it is so in such a way that all our individual descriptions must be some how similar. It’s quiet music that invites a moving point of view. Heward sounds Like he’s restricting himself to small instruments, while Wiens’ prepared guitar focuses on the minutiae of sound, so that one is often at a loss to identi fy who is making what sound, and how, at a particular moment. Part of the process of listening is to surrender that need, to wander into the music’s movement. Each player enjoys elliding tonalities, slides and glissandi and glassy rattlings that will recall the sonic world of Harry Partch. In this flux, one sometimes hears a passage in which a sound is so close and so necessary to Goldstein’s line that it is best identified not as drum or guitar, but as not-violin, the sympathy so strong that Goldstein might be playing one of his partners instruments. That blurring is especially strong around grating sounds, a metallic rubbing that often acts to rub parts together. At other times, a player will enter the discourse in such a marked way as to make you wonder how he had been previously absent. The two duets are, I think less successful than the trios, Heward too large a component for this music to surrender. The results seem suddenly, and only, binary, Goldstein becoming too markedly linear Wiens more fixed. Otherwise, this has the lulling gentleness of water, that gentleness that will erode mountains.

Chants cachés by contrast is a plugged-in affair, decidedly electroacoustic. The organic/laminal approach to improvisation of AMM is ever present, though with wider external references. Every so often shards of delta blues, jazz, gamelan, and African music emerge. Each musician knows the other’s parameters and a high degree of empathy is evident. John Heward uses a predominantly metallic percussion set-up, very different from his free jazz burnouts with the late Glenn Spearman, and Rainer Wiens’ prepared guitar produces a panoply of beguiling effects. By virtue of the relative pitches of the instruments, Goldstein unintentionally emerges as the lead voice on these very different and satisfying discs.

Composer and violin player Malcolm Goldstein is being recorded with increasing freguency and exhibits some of his most aggressive playing to date. In contrast percussionist John Heward performs with comparative restraint and sounds virtually absent from Trio 3. His only conventional performance is during the dynamic drive of Trio 5. Heward’s minimalism supplies crucial creative tension and space to a project that magnifies the input of Goldstein and Wiens. From the bell-like sononties that introduce Trio 6 to a timbre like steel drums in Trio 3, the prepared guitar of Rainer Wiens plays a pivotal role. His interplay with Goldstein and the inventive textures he adds to Trio 3, Trio 4, Trio 5 and Duo 1 are what make such absorbing and rewarding listening.

Wiens’s interplay with Goldstein and the inventive textures he adds… are what make such absorbing and rewarding listening.

Free improvisation is a mystery to many people. Reactions range from “that’s not music” to “they’re frauds” to “my five year old could do that” to “wow. ” What many people don’t realize is that despite its free and open nature, it is possible to become very good at free improvisation, particularly when you play with a close group of people over a long period of time. Malcolm Goldstein (violin), John Heward (percussion) and Rainer Wiens (prepared guitar) make up one such group, and wow are they good! Chants cachés is a richly detailed, subtle yet energized disc, and it really shows off the highly developed musicality of three improvisational veterans. Chants cachés might be tough listening for a while if you haven’t listened to much music like this before, but it’s well worth the effort.

… wow are they good! Chants Cachés is a richly detailed, subtle yet energized disc, and it really shows off the highly developed musicality of three improvisational veterans.

With the cd by Goldstein, Heward and Wiens three new names appear on Ambiances Magnétiques. This happens not that often, as most releases carry the names of Lussier, Duchesne, Hétu, Derome and their many friends. This trio is also from Canada and as the included information tells they already exist a long time. Goldstein is known as a performer of new music since the 60s. John Cage and Ornette Coleman composed for him. Heward is also active in painting and sculpture. Wiens works a lot in theatre. Wiens, Heward and Goldstein on guitar, drums and violin respectively present their first album here. It’s the result of playing together several years now. Their type of improvisation reminds me a lot of the european way of improvising as this came up since the mid sixties, when european jazz musicians started to develop their own idiom of jazz and impro music. It is hard to judge whether new territory is discovered here. Everybody who is into this kind of music and is curious to what new names make of it, should check this one out, as it is an example of good collective playing.

Everybody who is into this kind of music and is curious to what new names make of it, should check this one out, as it is an example of good collective playing.