Quator Bozzini is Clemens Merkel (violin), Alissa Cheung (violin), Stéphanie Bozzini (viola) and Isabelle Bozzini (cello). For two decades, this Canadian Quartet has been in business and working continuously from a strong idealistic mission, specialising in realizing contemporary and experimental music projects. Many projects featured works from composers from the Montréal-area and other parts of the world. This time they concentrate on works by Michael Oesterle, a German-born composer who lives and works in Québec. He did his studies at the University of British Columbia and Princeton University in the US. He composes for the concert hall as well as theatre, film and dance productions. His compositions have been performed by outstanding ensembles like Ensemble Intercontemporain (Paris), and Tafelmusik (Toronto). Quator Bozzini is one of the ensembles Oesterle has worked for already for a long time. The quartet debuted in 2004 with ‘Portrait Montréal’ with works by Claude Vivier, Malcolm Goldstein, Jean Lesage and one by Michael Oesterle: Daydream Mechanics V (2001). This composition is included again on this new release by the quartet with three other more recent compositions by Oesterle. The composition Daydream Mechanics V is also recorded recently by the ensemble Music in the Barns for their release for New Focus Recordings, beautiful, elegant work. The compositions on this new release by Quator Bozzini introduce Oesterle as a composer of accessible compositions of a minimalistic nature. The cd opens with String Quartet No. 4, his most recent composition and maybe the most complex one on this recording. A work built up from different episodes, some of them very melodic with a catchy theme contrasted with more rigorous parts. Like the opening part, very dynamic, contrasted with a very soft and reduced experimental section. Three Pieces for String Quartet ( 2016) has a pastoral atmosphere, with lively and accentuated gestures by the players. In the second part, the music touches on the motives of early classical music. String Quartet No. 3 “Alan Turing” (2010) is likewise an evocative work full of gentle and subtle movements, using a very close theme to the one used in the opening work. Interesting works delivered in an inspired performance! 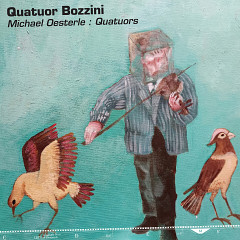