This is Ingar Zach ‘s floating layer cake. The disc consists of two lengthy tracks beginning with The Lost Ones, a collab with Canadian string quartet Quatuor Bozzini and others. Low frequency tones fall in the hollows and as slow booming percussion takes steps an alert violin leads to a tiny gaggle of chimes. Drone and drama as the strings twitch quickly, instantly. The tubular distortion and mirage-like chords are stretched to their ultimate lengths, fading away and making room for the bass boom of percussion and a chilling space that is saturated in a trance-inducing frequency, and the smoothly delivered voice/words of poet Caroline Bergvall. And with the random and flailing strum of Kim Myhr’s guitar that stage is set for conjuring lost souls. The harmonies come together in brief moments, otherwise are constantly at odds, varying in form and velocity, contorting like an fortuitous wind chill.

For Let the Snare Speak Zach originally invited the Australian percussion group, Speak Percussion to help raise eyebrows. I did review their direct collaboration last year, which was a very different animal. Here he goes it alone wielding snares and vibrating speakers. This opens the ears and consciousness with an awakening tone that becomes a bit difficult to listen to until the point unto which it becomes hypnotic. These sinewaves are sneaky, but you’d hardly know it until you mind is mush. This is most definitely post-Cage in style and substance, and deviates into the world of pure noise. The combination of rattling and drone make for a one-two punch, so much so that I had to step out of the room to actually understand the layers and separation that was occurring. After about eight or so minutes, though there are slight variables in terms of volume, a form/s start to emerge as if he’s sculpting the accumulated mass. The track crescendo is at peak volume and dappled layers begin to show themselves. Only in the final four minutes does Zach quicken to add a bell-like effect that begins to move this along. As the noisy haze dies out this cyclical pitter-patter chimes away as if to keep the listener alert until it also begins to slow. File under non easy listening. 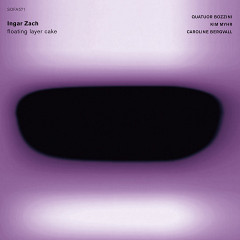 floating layer cake
Low frequency tones fall in the hollows and as slow booming percussion takes steps an alert violin leads to a tiny gaggle of chimes. Drone and drama as the strings twitch quickly, instantly.