Montréal’s peerless Quatour Bozzini uses overdubbing to adapt two typically intense works by Phill Niblock, originally scored for orchestra, illuminating the inherent psychoacoustic effects with breathtaking power. Disseminate was written in 1988 for Petr Kotik’s S.E.M. Ensemble; it opens with a crushing, buzzing unison, as the stacked microtonal intervals suggest a chorus of bagpipes blaring through a wall of Marshall amps. Dazzling beating and machine-like throbs surround the listener, but the unison begins to fall apart almost immediately, with painstakingly slow shifts. Like so much of the composer’s music, you don’t notice the change until you’ve reached the next location. Still, there are moments when some tonal shifts are greater and there’s no missing the stark developments, as when a few strings emit a wonderfully glassy screech around 20 minutes in. The title piece was composed for the Janacek Symphony Orchestra with the Ostrava banda in 2011. It begins with what sounds like a conventional chord spiked with dissonance, and its lengthy descent to B-flat begins with a mixture of B-sharps and C-sharps. The downward motion is inescapable and exhilarating, with tonal effects that sparkle and groan simultaneously, an impossibly thick, viscous drag that suddenly feels celebratory when the final notes disintegrate. 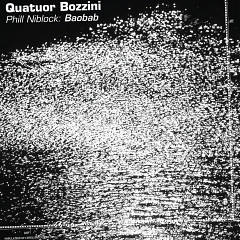