The Sheffield-based label Another Timbre specialises in experimental music, from the postwar US generation of John Cage and Morton Feldman to the present day. Lately, it has made a special feature of Canadian composers, and among its latest releases are two discs devoted to the music of Cassandra Miller, who grew up in British Columbia and is now based in London. Her teachers have included Michael Finnissy and Richard Ayres, but, as the eight pieces on these recordings show, her music is hard to categorise, its starting points unpredictable and wide-ranging.

In Quatuor Bozzini’s survey of Miller’s quartet pieces, the four movements of Warblework are based on the songs of four north American thrushes, while About Bach, as its name signals, is a homage, with a solo violin spiralling high above fragments of chorales derived from the famous D Minor Chaconne. In Philip the Wanderer, composed for the indefatigable pianist Philip Thomas, the source is a recording of a Mozambican musician, while the solo-violin For Mira is based on a computer transcription of Kurt Cobain singing Where Did You Sleep Last Night. In every one of these pieces, though, Miller’s response is totally her own. The music never seems second-hand or derivative in any way.

Perhaps the most striking of all is Duet for Cello and Orchestra, from 2015. It began, Miller says, as a homage to the composer Vincenzo Bellini, and also makes extensive use of an Italian folk song. But the solo cello (played with wonderful restraint by Charles Curtis in this performance with the BBC Scottish Symphony Orchestra and Ilan Volkov) is mostly limited to a scarcely changing sequence of alternating fifths, while the orchestra has a frieze-like succession of increasingly dense flourishes above it. The soloist only breaks free in the final moments for a brief cadenza in harmonics, which seems to belong to another musical world altogether. It’s a strange but profoundly haunting piece.

Another Timbre launched its Canadian series last year with Drifter, a two-disc collection of pieces by Linda Catlin Smith, New York-born but now based in Toronto. The most recent batch of releases includes another album of her quietly unassuming and entrancingly beautiful Feldman-esque music.

On Smith’s Wanderer, there are eight works played by members of Apartment House, each of them using a single musical idea to devastating effect — shared melodic lines in the ensemble pieces Knotted Silk and Stare at the River, gradations of touch in Velvet, for two pianos — and all totally beguiling. 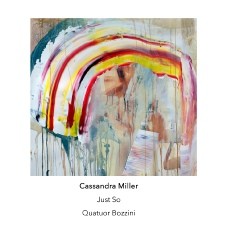