Erik Satie is an iconic avant-garde composer, ahead of his time, underestimated by teachers and rebuffed by critics. Posthumous revenge (if there is such a thing) has been sweet, as his music is some of the most often performed in a variety if contexts, including the stage, film and cabaret settings. This particular recording of Satie’s music takes an appropriately creative approach to rendering the quirky, mystical and ultimately uplifting music.

In the 18 tracks on the CD the Québec sextet Cordâme (a French pun on “strings-soul”/”body-soul”) perform many of the popular themes of this enigmatic, yet accessible composer. The musical pallet includes such pieces as the Gnossiennes, the Gymnopedies, as well as some less-often played compositions such Danses de travers, Rêverie de l’enfance de Pantagruel and Réflexions sur choses vues à droite et à gauche (sans lunettes).

The flow of rhythm that characterizes this set draws more from jazz, gypsy music or pop music than from the classical template, with a steady pulse emphasized by percussion and bass, underscored by the string duo of violin and cello, and punctuated by the percussive interplay between piano and harp. The result is graceful, beat-based expression of this diaphanous and at times surreal music, with the languorous harmonies and telescoping melodies being borne by the lilting rhythms.

The compositions, while respected in their forms and lyrical content, are laced with improvisations and structured in arrangements that color the pulses, while preserving the recognizable qualities that people love about Satie. This is not abstract avant-garde, nor romantic excess. It is restrained, yet expressive, with a resulting sweet tension that is mostly light and pleasant. 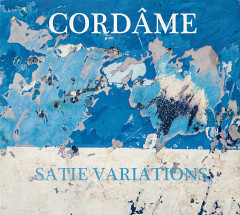 Satie Variations
This is not abstract avant-garde, nor romantic excess. It is restrained, yet expressive, with a resulting sweet tension that is mostly light and pleasant.