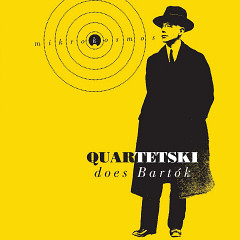 Mikrokosmos Sz 107
Technical virtuosity meets a virtuosity in cleverness is the best way to describe this music. Homage, respect, innovation: paint that on a banner and hang it at the next Quartetski show.