In 2010, trombonist Scott Thomson left his native Toronto for Montréal. “I wanted to change scenery, he states in a recent conversation, so I moved here to stake the turf for awhile.” Luck would have it that his landlord would be none other than Jean Derome. In the seven years since, the new man in town has fully integrated himself into the scene, earning his spot as the all-purpose bone player in the Ambiances Magnétiques collective. Over time he has proved himself as a dependable sideman while issuing two sides under his own name for that same label.

In the last year or so, he has raised his profile, chiefly as an organizer of special projects. For the 2016 edition of the Suoni per il Popolo festival, he assembled a ten-piece brass ensemble to perform a work co-written with the ever daring Hog Town saxman John Oswald. Four months later, in October, he was one of three ring leaders behind the 20-piece orchestra that closed out the Off Jazz Festival with guest composer and soloist Roscoe Mitchell. As all good things come by threes, Thomson has now taken on his greatest task to date, as new artistic director of the Guelph Jazz Festival.

Founded in 1994 by Ajay Heble, a professor of English literature at the city’s University, the Guelph jazz event has been one of the country’s prime showcases for all types of jazz and improvised music with an edge. After two decades on the job, its founder bowed out, leaving a void that was filled by two interims till this year. Having been a frequent performer in years past, Thomson was no stranger to it. This time around, he is in charge of the event, now in its twenty-fourth edition, but will remain behind the scenes.

As he recollects, everything happened quickly. “In that transitional period, the festival was in trouble financially, its future even in doubt. A new board of directors took over and decided to forge ahead. They posted the job, I applied, was called in for an interview, and just three weeks later, last January, I was hired.”

Filling the shoes of the festival’s founder was enough of a challenge, all the more when Thomson had but three months to put the whole program together under tight financial constraints. “It’s something of a litmus test, for myself, because I signed a one-year contract, but for the event too, as a sustainable one.” One thing is sure, Thomson wants to preserve the event’s adventurous streak. Unique to this festival is a scholarly symposium devoted to improvisational practices, now coordinated by Professor Heble himself.

But ensuring content is not the only responsibility of an artistic director. He also has to provide a framework that is as enticing to music fans as it is user-friendly. To that effect, the new director has introduced a range of one-day package deals for its Saturday schedule (the busiest day of the event) while offering a shuttle service from downtown Toronto to the festival site.

For all of his tasks, Thomson is still a performing musician at heart, yet he has no intention of using the festival as a springboard for his own career. “I will be there only to listen,” he insists. “If circumstances are right, I may well perform in the future, but it’s not my goal at all.” 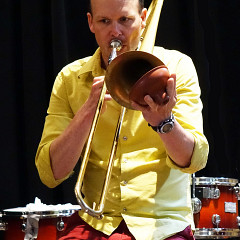 Scott Thomson
In 2010, trombonist Scott Thomson left his native Toronto for Montréal. “I wanted to change scenery, he states in a recent conversation, so I moved here to stake the turf for awhile.” Luck would have it that his landlord would be none other than Jean Derome.