Speaking of Pierre-Yves Martel, I was reminded of his astonishing record Continuum when I heard Émilie préfère le chant (AM 223 CD), a solo release by Émilie Girard-Charest, and wondered if this talented violoncello player had spun in his orbit or come under his influence to some degree. Her self-composed S’offrir is an exquisite dream of near-silence: as with Continuum, there’s the same concern with maintaining a rigid posture while playing and doing nothing to disturb the enchanted mood. The other interpretations of works by contemporary composers are slightly more “busy” and would veer towards the now-conventional dissonance and randomness, were it not for the exciting electro-acoustic effects (I think) in evidence on such strange weirdies as Espoir squelettique, written by Maxime Corbeil-Perron. Altered Gray by Frederik Gran is another one that seems to have electronic elements bundled in the package, and is equally puzzling in its uneventful, hard-to-follow structure. Arid spiritual journeys await the listener here, with only a few drops of cold water offered for relief along the trail, and it’s never clear what the destination is or when we’ve actually arrived. Joane Hétu (see above) composed the title track, an angular and unpleasant piece that requires much dragging and stabbing of the strings to perform it. 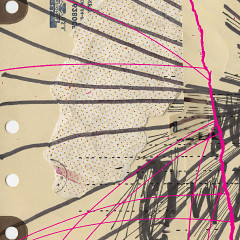