Jürg Frey is inextricably tied to the group of Wandelweiser composers and musicians, and like that group, his music continues to elude easy categorization. The last year has been a particularly fruitful one, revealing extensions to his compositional approach. There was the release of the two-disc set Grizzana and other pieces 2009-2014 for small ensemble on the Another Timbre label as well as his residency at the Huddersfield Contemporary Music Festival, featuring multiple performances of his pieces. Two other releases, Circles and Landscapes and String Quartet No. 3; Unhörbare Zeit deserve special focus as each represents the continued development of Frey’s compositional sensibilities. (…)

Frey’s string quartets, particularly Striechquartett II, are some of his most absorbing pieces, particularly as performed by Montréal-based Quatuor Bozzini. In these pieces, the composer makes potent use of the microtonal nuances of the string instruments to elicit fragile, almost vocalized voicings of his poised harmonic structures. Where his second string quartet created a diaphanous scrim of sound, on String Quartet No. 3, he opens things up, introducing a spaciousness to the deft voicings. The members of the quartet are completely synched in to Frey’s strategies, fully embodying the tonal structures into a singular sound. Frey writes about this piece, “Elemental materials and constructions are thereby perceived as a sensation, and mindfulness consists in hanging these sensations in balance before they have arrived at the limitations of expressiveness.” And it is the way that the quartet hangs at the edges of expressiveness, letting the sensations of the notes and harmonies play out without investing them with dramatic expression. It is this equanimity and stability that allows the piece to play out in a totally absorbing way.

Unhörbare Zeit (inaudible times) adds two percussionists to the mix and here the structure opens up even more. The durations of silence are as central to the piece as the sounds of strings and the low rumbles of percussion. Frey states that he is working with “audible and inaudible durations that appear partly simultaneously and partly consecutively. They give the piece lucidity and transparency, as well as materiality and solidity.” While silence as a structural element has been fully absorbed into the vocabulary of contemporary composition, it is the way that Frey gives the silences weight and dimension within this piece that really stands out. The balance of the timbre of strings, low register percussion, the rustle of room sounds and the mercurial pacing of sound and silence is fully entrancing. 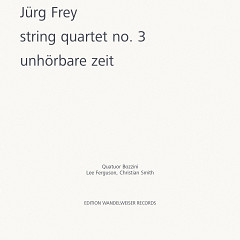 String Quartet No. 3; Unhörbare Zeit
The balance of the timbre of strings, low register percussion, the rustle of room sounds and the mercurial pacing of sound and silence is fully entrancing.