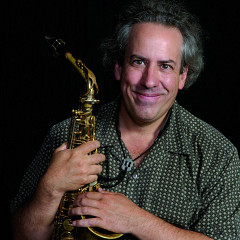 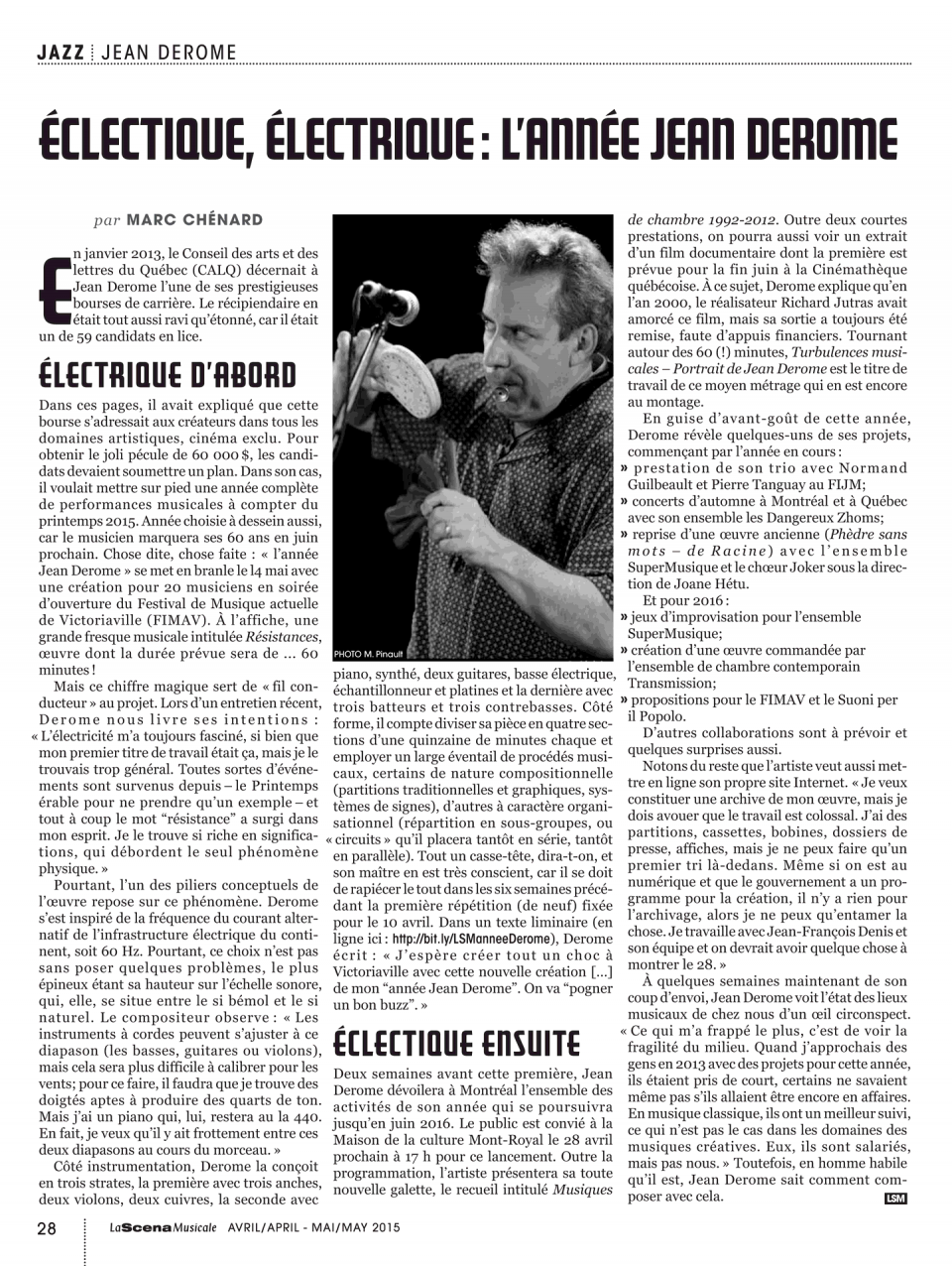 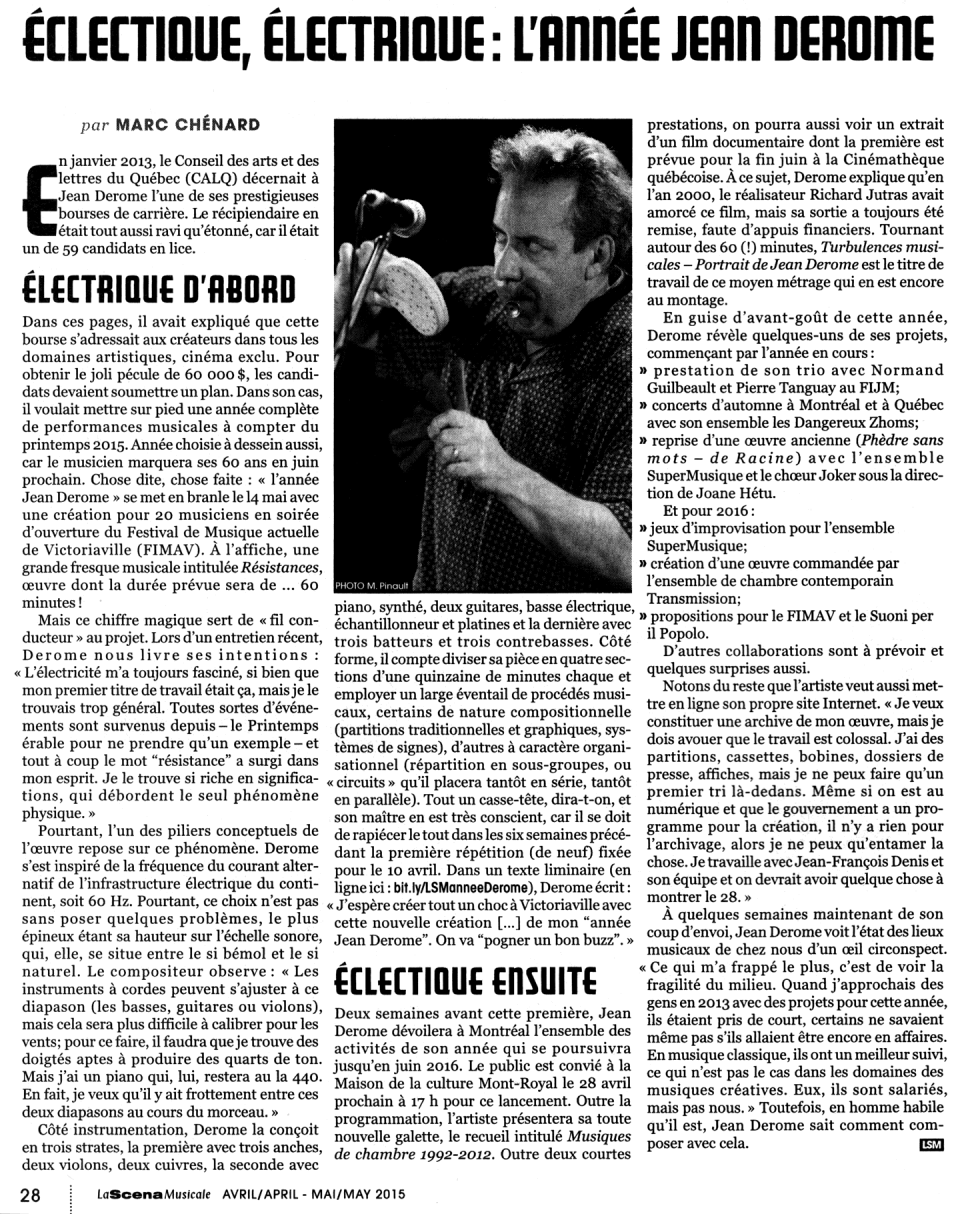 In January 2013, the Arts Council of Quebec (CALQ) bestowed one of its prestigious lifetime achievement awards in the arts to Jean Derome. With a career spanning over 40 years, this composer and multi-instrumentalist certainly qualified on longevity alone ─ yet the $60,000 attached to the prize was not just handed to him. First, he had to apply for it then a jury had to adjudicate his application with 58 others stemming from all fields except film.

To qualify for this bursary, he had to outline a series of projects in his proposal. A demanding task, one could say, but this undertaking also required a lot of thought on his part, plenty of paperwork and two years’ lead time to set everything up. As fate/luck would have it, he turns 60 this year, a serendipitous (auspicious?) occurrence to say the least. On May 14, Derome will finally kick off a year’s worth of events at the Victoriaville festival (FIMAV) with the premiere of “Résistances”, an ambitious work for 20 musicians that should clock in around the 60-minute mark!

During a talk in late February, the musician pointed out that there was more to that number than mere coincidence: “Electricity has always fascinated me; in fact that word was my working title, but it seemed too general. Since then, a number of events caught my attention, like the springtime student strikes of two years ago, so the word ‘resistance’ came to my mind. I like it because it means so many different things, far beyond the physical phenomena.”

The work hinges conceptually on that electrical phenomena. The composer learned that the North American power grid is tuned to the frequency of 60 Hz, a discovery that lead him to use that pitch as its tonal centre. But this choice raises some problems, because it lays between the Bb and B natural of the tempered scale. “Stringed instruments can tune accordingly,” he explains, “but that’s harder to do for wind instruments, so I’ll have to devise some alternate fingerings to produce quarter tones. I have a piano which will remain at standard pitch, but my intention here is precisely that: to make these tunings clash in spots.”

With regards to instrumentation, the group will be divided in three sections, or layers, as he calls them: three reed players, two violinists and two brassmen will occupy the front line, a keyboardist, a synthesizer player, two guitarists, one bass guitarist, a sampler player and another on turntables will be in the middle, while three percussionists and as many bassists will fill out the back row. Its overall form will be divided in four main parts of 15 minutes. What’s more, the work will be enhanced by a host of organizational procedures ranging from conventionally notated scores to graphic ones and hand signals, or divisions into ‘circuits’, i.e. sub-groups that will be connected in either alternative or parallel modes. After spending much of March fitting the pieces of the puzzle together, Derome gathers his troops for the first of nine rehearsals on April 10. The composer himself has provided his own introductory text (in French), appended to his article in the French version of this article (see link at top or bottom of page). But for now, here is a translation of his final words on the subject: “I hope to create quite a shock at Victoriaville […] with this new creation for the Year of Jean Derome. We should all get a good buzz out of it.”

On April 28, Derome will unveil his plans in toto in Montreal at the Maison de la culture Mont-Royal. From 5 to 7 PM, there will be a record launch, a short excerpt from a documentary, and two live music performances. The recording presented will focus on chamber-music works written by Derome. The film is an hour-long feature on the musician whose probable title may well be its working one: Turbulences musicales, un portrait de Jean Derome. Started in Y2K, the project remained on the shelf until recently, but will finally be premiered in the first days of summer at the Cinémathèque québécoise.

Jean Derome’s banner year of musical projects will stretch out into the next year with an array of performances, most involving him as a performer, but some uniquely as a composer. As a preview, here are a few for the current year:

»“Phèdre sans mots de Racine”, a reprise of earlier work performed in November by the Ensemble SuperMusique and the Joker Choir

» Improvisational game pieces for and by SuperMusique

But that is only part of the story, with plenty more to come, and a few surprises, too.

On April 28, Derome will also launch his personal website. “I want to archive my work online, even if,” Derome concedes, “the task is quite forbidding. I have so many scores, cassettes, tapes, press kits, posters, that I can only scratch the surface of it all. Our government now offers funding for creation in digital art, but nothing for archival purposes, so I can only do so much. The plan is to have the site online that day, and I have some assistance from a small team.”

Since receiving this award, Jean Derome has pondered on the state of affairs in the artistic community at large. “What strikes me the most is how fragile things are. When I first approached people two years ago, many were caught off guard; some didn’t even know if the’y still be around! In classical music, there are better guarantees for continuity, which is not the case for the area I work in. You see, musicians there earn a salary; we don’t.” But Derome has enough of the smarts to best compose with that.