Although the text here in front of me says there are three new releases on Tour de Bras, a label from Quebec, there are in fact on two in the mailer, of which one will be handled by someone else sometime soon. The other one is a duo disc of Philippe Lauzier (bass clarinet, soprano saxophone) and Eric Normand (bass and ‘caisse claire’, of which I couldn’t find a proper translation). The three pieces here were recorded in concert in March 2014 and the label defines the music as ‘chamber noise’. Both of these players have a history in the world of improvised music, having played with Martin Tetreault and Jim Denley among others. The music here could be labeled as ‘heavy’; ‘heavy’ as in noise based. Lots of this revolves around the scraping of sounds, with some added reverb to make it all a bit heavier. It peeps and scratches, likes feedback; like fingers on a blackboard, like the very early Organum at times. Not something for the weak of hearth, but if you are accepting then an excellent sound world opens up. The sound of what seems a 1000 violins being scraped simultaneously, but this duo also knows how to pull back, slow down and space out, such as in the second part. Tour de Bras? Tour de force is more like it. Excellent stuff. 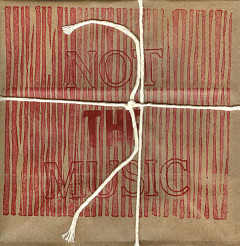 Not the Music
Excellent stuff.