The Festival International de Musique Actuelle de Victoriaville (FIMAV) celebrated a milestone this year, presenting its 30th festival of musique actuelle — that unique French descriptor covering improvised music, chance, electronica, the avant edges of jazz, rock, folk, and world, and any other genre that has challenged expectations over the past few decades. That durability might seem unlikely for a festival of marginal music presented in a rural hamlet 160 kilometres from a major city, but FIMAV is persistent testimony to the vision and energy of its founder and artistic director Michel Levasseur, who has tirelessly maintained the festival in his hometown. (…)

A transcendent community was apparent in a concert by Montreal’s nineteen-member Ratchet Orchestra, celebrating the 100th anniversary of Sun Ra’s birth with special guest Marshall Allen — the long-time saxophonist with the Sun Ra Arkestra and that band’s current leader — nine days short of his 90th birthday. Begun as a Sun Ra tribute band twenty years ago, the Ratchet Orchestra has gone far beyond that, evident in the eighty-minute suite that merged Sun Ra themes with Ratchet leader, bassist, and arranger Nicolas Caloia’s own ideas. The music moved like a slow majestic blues, highlighted by contrasting explosions of instrumental colour (bass reeds, shouting brass, strings, electronic keyboards, and percussion), often surmounted by the explosive fury of Allen’s saxophone or the exotic flute of fellow Arkestra veteran Danny Thompson, and hitting its climax in Allen’s extended passage of orchestral conduction.

That sense of orchestra as community also came across strongly with GGRIL (Grand groupe régional d’improvisation libérée), a fourteen-member collective from Rimouski. GGRIL is a kind of poststructuralist village band. During a program that included works by Robert Marcel Lepage and Jean Derome, leader and bassist Éric Normand and violinist Raphaël Arsenault engaged in a coconduction, in which the two exchanged orchestra halves and seemed to compete comically for authority and sound, taking the conductor’s role to the level of professional wrestling. (…) 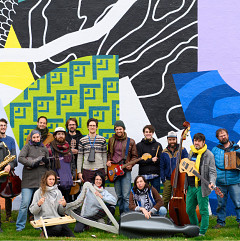