“The noisiest concert of FIMAV 2011” is an unsurprising press release designation as soon as you take a look at the names behind this document. However, Victoriaville Mai 2011 comprises “spontaneous compositions” that seem to be born from quietness: the set begins with rarefied synthetic signals and small background noises, to end instead in a type of reasonably regimented mayhem where each of the components is given a proper role. A process of nuclear fission observed from safe distance, in a way.

There are at least two factors that prevent the music to cross the borders of utter chaos. Pinhas’ all-encompassing guitar loops are — rather evidently — the main anchor for the whole sonic ship to stay within the waters of harmonic tolerability, whereas the occasional pulsations produced (presumably) by Masami Akita’s electronics throw an ounce of virtual steadiness to distorted heaps, uncontainable oscillations and straying feedbacks. Yet it’s not easy to establish where exactly supreme noise and functional sound meet in the Japanese’s arsenal.

On the other hand, Wolf Eyes are definitely a fundamental addition to this rite of cathartic discharge, perfectly put in plain detail by Nathan Young’s filtered screaming. On the contrary, unobtrusively condensed lumps of sax and guitar collocate a few sections of the improvisation straight into Tranceville, slight echoes of early minimalism crossing the mind as one imagines benign smiles by Terry Riley and Tony Conrad should they ever stumble upon the “calmer” traits of this record. But when the reins are let loose — it happens quite often, especially in the 9 1/2 minutes of the encore — it’s still better to step back a little to avoid the flames. 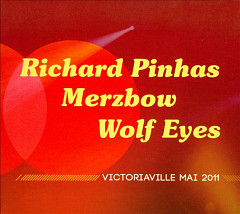 Victoriaville mai 2011
… when the reins are let loose — it happens quite often, especially in the 9 ½ minutes of the encore — it’s still better to step back a little to avoid the flames.