Of all the instruments that needed the advances of free music in the 20th century to show off its true character, it has been the double bass which benefitted most from this situation. Relegated to decorative, scene setting or mere rhythmic functions in conventional classical and jazz performances, it was only when bassists were able to express themselves without restraint that their role grew. By the 21st century in fact, solo bass recitals became as commonplace as those by other instrumentalists. The reason, as these CDs demonstrate, is the arrival of performers who can extract a multiplicity of novel tones, timbres and textures from four tautly wound strings. […]

If Jones’ electronic interface is limited, Montréal-based Alexandre St-Onge and Norwegian-in-Austin Ingebrigt Håker Flaten draw more textures to their finger tips by utilizing amplified electric basses on their solos sessions. A member of bands such as Klaxon Gueule, as well as studying for his PhD in art, St-Onge describes himself as a sound performer and the six selections on Ailleurs (&records ET 18) are studded as much with signal-processed drones and splutters as reflective string modulations. Layering the sequences with loops that replicate sounds ranging from ring-modulator whooshes to bell ringing and distorted flanges, the basic double bass-like rhythmic qualities of the instrument are muted. Only on the fifth track does the tremolo, dial-twisting exposition pull back enough for a semi-acoustic interlude. Here juddering bass-string plucks can be heard contrapuntally advancing the narrative, which is still decorated with additional droning lines and wiggling voltage-affiliated cries. The achievement of Ailleurs is that by mutating its intonation and freeing the bass from its limitations as a purely rhythmic instrument a new interface appears. The reverberating result is of an expansive formula that evocatively builds on expected bull fiddle timbres the way a realistic photograph could be the basis for a surrealistic art. […] 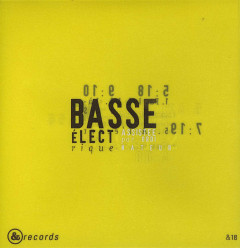 Ailleurs
The achievement of Ailleurs is that by mutating its intonation and freeing the bass from its limitations as a purely rhythmic instrument a new interface appears.