Montréal-based poet Fortner Anderson has published in November 2012 his most ambitious project to date. It consists of a book of poetry, Annunciations, featuring three poems based on texts published by NASA, the UN, and the US military base at Guantanamo, and a 3-CD box set also entitled Annunciations. Anderson has recorded several readings of his poems, which he has sent to nine sound artists. The album consists in three CDs of three pieces each, for a total duration of 95 minutes. All three poems are represented on each CD, but artistic visions and processes vary greatly. Some, like Ned Bouhalassa, Nicolas Bernier, Andy Williams and John Berndt, have lightly treated Anderson’s voice and created an electroacoustic setting for it. Others, like Christian Calon and Chantal Dumas, went deeper into vocal treatments. Alessandro Bosetti pushed the concept further by applying to his own voice the water-boarding technique discussed in the third poem. Finally, Christian Kesten redacted all the words from Anderson’s tape, keeping only the breathing sounds. […] The works that stand out are Bernier’s (for the balance between Anderson’s words and the sonic environment) and Bosetti’s (for its originality and oddity). Book and triple CD set sold separately. 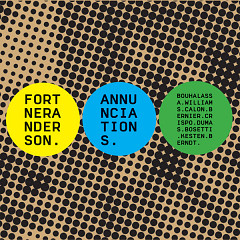 Annunciations
The works that stand out are Bernier’s and Bosetti’s.