La femme territoire is both the logical next step and the complete opposite of Joane Hétu’s previous work Filature. While Filature was a large-scale production with lots of people involved, lots of rhythm too, La femme territoire is limited to five performers and plays out in a Spartan, highly-conceptualized setting. Both are multimedia works, but while Filature was trying to overload your senses, La femme territoire is offering less in order to say more, and music, poetry, dance, video art, and performance art are all more tightly intertwined. Obviously, this CD does not document the whole project (though the booklet contains several photos of the production), and I was worried about that, since I have had the pleasure of seeing the full production of La femme territoire in October 2010. Well, the music does well on its own. I’d even say it imposes itself. These 21 fragments of humus are not easy to absorb, but beyond their stripped-down nature, the deconstruction, the atomization of musical elements, I reconnect with everything that makes Joane… Joane: a series of dichotomies like melody/noise, organization/improvisation, tenderness/desire, reflection/craziness. A record of troubling beauty. With Susanna Hood, Alice Tougas St-Jak, Jean Derome, and Isaiah Ceccarelli. 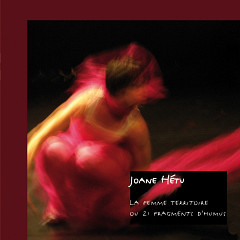