Ensemble SuperMusique is/are an Ambiances Magnetiques all-star ensemble with ten members for this set, which featured longtime AM players like Jean Derome, Joan Hetu, Michael Cote, Danielle Roger and Martin Tetreault plus some young musicians like Alexandre St-Onge (el. bass) and Guido De Fabro (violin). The musicians sat in a semi-circle so that they could see each other and the music seemed as if it were directed by certain improv guidelines. The instrumentation included two reeds (Derome & Hetu, also on voice, two percussionists (Roger & Cote), cello, violin, electric keyboards or synth and turntables. Considering that there were ten musicians on stage, the music was often sparse yet focused. Much of the set reminded me of John Zorn’s early game pieces (which are also directed improv without someone directing up front), although the overall vibe was slower and more cautious. Ms. Hetu did some odd vocal sounds which always fit well within the framework on the piece. Since nothing was explained, there were a series of incidents that took place which we had to interpret for ourselves. Each musician took a turn sitting in the middle of the stage and drawing or putting info into a laptop which directed the next part of the piece. I especially like the way each percussionists added something distinctly different to the direction of the set. There was also a fine sax duo with two founding members of the AM label, Joan Hetu and Jean Derome, which was both charming and quirky. I spoke with a few audience members who were confused as to what was going on on-stage so it did take some effort to figure out how things worked. Fractured fairy tales, indeed. 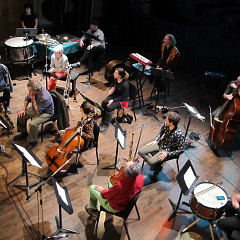 Ensemble SuperMusique ()ESM ()
I especially like the way each percussionists added something distinctly different to the direction of the set.