Owen Underhill is a major presence in Canada’s new music community; the launch of a new CD, Still Image, devoted to his chamber music, proved both a welcome sample of his recent work and a demonstration of his personal journey as a composer.

Somewhat unusually for a launch, at least where classical repertoire is concerned, Sunday evening at SFU Woodwards saw the live performance of all four works on the disk: two string quartets written about a decade apart, performed by Montréal’s Quatour Bozzini, plus two quintets. Accepting the slightly artificial construct of an entire evening of work by the same composer (which invariably blurs the already wide line between superficial mannerisms and the genuine original voice) the selection of works proved a good one. Underhill’s strategies for the string quartet have a consistency, but there is also a sense of growth and discovery, revealed by the conjunction of his String Quartet No. 3 — The Alynne, written in the late 90s, and the new String Quartet No. 4 — The Night composed last year.

I’ll admit that my own firm predjudice against the combination of clarinet and strings made me less enthusiasic about Still Image, a clarinet quintet that takes the special skill set of François Houle very much in mind and ear. Yet it’s by any standard an effective piece.

My favourite work of the evening saw the rare combination of trombone and strings. There has been little written for this particular combination; Underhill’s lovely work makes one wonder why. I’ve long believed that a number of Vancouver’s finest trombone players are some of the most sensitive musicians in town. That Jeremy Berkman could reveal an enormous range of sonorous possibilities was a given, as was the inevitability of a sterling performance.

Underhill has created a showcase for the trombone, with both plenty of novelty and a rock-solid foundation of expressive and very beautivul writing for the instrument with string support and commentary. The four-movement Trombone Quintet is a composition that would grace virtually any chamber music program, and a real treasure for those trombone players who wish to participate in the rarefied world of chamber music-making. 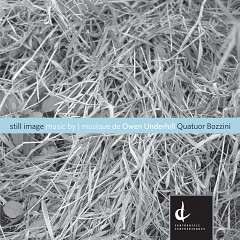 Still Image
… proved both a welcome sample of his recent work and a demonstration of his personal journey as a composer.