Although Ms. Tagaq is a Inuit throat singer from the northern region of Canada, this doesn’t begin to explain her exhilarating and incredibly intense performance at the Victoriaville Festival in May of 2010. I had caught her once at the Guelph Fest in a more intimate improv situation but her Victo debut was something else altogether. She wisely chose two of Canada’s best improvising musicians to collaborate with: violinist Jesse Zubot (Vancouver-based & head of the Drip Audio label) and drummer Jean Martin (Toronto-based & cofounder of Barnyard records). Both visually and vocally, Ms. Tagaq was a bit over-whelming as she delivered her own strange, animalistic vocal sounds and danced like a demon in flames. It was a spectacle no one who attended will soon forget. Tanya’s uses her voice in odd ways, twisting and bending it into shapes not so easy to describe. Snarl opens with just Tanya moving between two different vocal characters or inflections: a young woman with higher more fragile voice and an older woman with a breathing problem or hoarse witch-like quality. Slowly Jesse adds fractured strings and Jean adds subtle percussion, as the trio blends and builds the into a tight frenzy, casting their own spell over the attentive audience. Ms. Tagaq’s throat-singing is much different from the Mongolian throat-singing that most of us have heard in the past, giving it an exorcist sort-of quality. Mr. Martin adds eerie electronic samples on Plush and perhaps he is the one who adds echoes or manipulates Tanya’s voice adding another layer or two. Being present at this concert, I was somewhat overwhelmed by the visual content and loud volume, but listening to the disc I hear more of the connection between the players and the overall music display or picture. Tanya often sounds as if she is playing different characters, from a crying little girl to a scary old lady. Jesse and Jean do a fine job of adding their own sympathetic interaction selectively and at times just laying out while Tanya creates another voice or presence. Like all CD’s on the Victo label, the sound is superb and well-balanced. At times it hard to tell that Ms. Tagaq is making those sounds herself, they are completely captivating and sound like the language of a friendly alien. 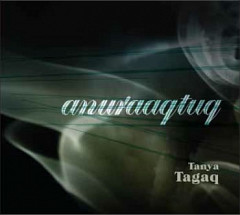 Anuraaqtuq
It was a spectacle no one who attended will soon forget.