Martin Tétreault introduces his Quatuor de tourne-disques, a very recent project. Featuring Nancy Tobin, Alexander MacSween, David Lafrance and Magali Babin on turntables. Tétreault on composition and direction. Most of the tracks on this short record are compositions or conducted improvisations (three are free improvisations). The graphic scores for the compositions are included in the sleeve. This is highly abstract music made of turntable sounds (no vinyl quotes), closer to the visual arts (some figures are almost palpable) than music. An interesting concept, but the first listen didn’t convince me as to the results. I’ll have to give a few tries. The album comes with a stereo CD and a 4.0 surround sound DVD. 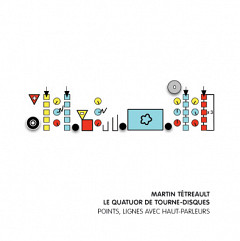 Points, lignes avec haut-parleurs
This is highly abstract music made of turntable sounds…