Canadian composer Claude Schryer was first active in contemporary classical music before turning to electroacoustics and, more specifically, environmental/ecological soundscapes. He is also a film soundtrack creator, an improviser, and an administrator.

Schryer was born in Ottawa but grew up in the small nearby town of North Bay, where he was in constant contact with nature. As a child he studied the piano and the clarinet. In 1981 he earned a Bachelor of Music degree in composition at the Wilfrid Laurier University (Waterloo, Canada), studying with Owen Underhill. A number of chamber works date from that period but remain unrecorded. During the early 1980s he studied at The Banff Centre for the Arts where he got in touch with interdisciplinary and experimental artists. His now growing interest in electroacoustics led him to a two-year stay in Europe where he learned the trades of the art with Denis Smalley and Luc Ferrari. In 1989, he received his Masters degree in composition from McGill University in Montréal. In the meantime he had co-founded the Group of the Electronic Music Studio (GEMS) and DIFFUSION i MéDIA and its record label empreintes DIGITALes with Jean-François Denis.

He cumulated administrative titles in the 1990s, from artistic director of the 7e Printemps électroacoustique festival (1990-1992) to director of the Canadian Electroacoustic Community (1993-1994) to co-founder and president of the Canadian Association for Sound Ecology. This decade also saw him focusing more and more on environmental compositions and acoustic ecology. Following the philosophy of R Murray Schafer and the composers revolving around the World Soundscape Project based at the Simon Fraser University in Vancouver, Canada (Hildegard Westerkamp, Barry Truax), his works gradually turned away from the transformation of sound to approach composition with unaltered sound sources. His most ambitious project was the Musique Portuaire pour Sirènes et Cloches (“Harbour Music for Horns and Bells”), a in situ composition for six boats, two trains and the bells of the Notre-Dame Basilica. A reworking of this piece can be heard on Schryer’s CD Autour (empreintes DIGITALes, 1997). 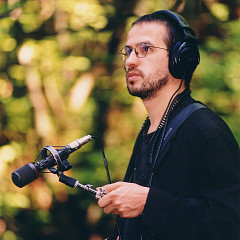