[…] Intertwining horn work is another leitmotif of Henneman’s combo, and in Toronto, Dörner shares the front line with Baars and Montréal’s Freedman. This sort of timbre blending is a regular facet of the bass clarinetist’s performances. It can be sampled on Isaiah Ceccarelli’s dramatic Bréviaire d’épuisements Ambiances Magnétiques AM 199 CD. Much different than the Henneman sextet’s jazz-oriented fare this session amalgamates the ecclesiastical and the atonal. Émilie Laforest and Josée Lalonde intone or vocalize Marie Deschênes’ texts, with distinctive sonic timbres heard alongside these lyric sopranos arising from Freedman’s and Philippe Lauzier’s bass clarinets, Pierre-Yves Martel’s viola de gamba and Ceccarelli’s percussion arsenal. The drummer’s most common strategy involves scrapping cymbals against drum tops, acoustically producing the sort of grinding and buzzing textures that otherwise would be associated with electronics. Meanwhile the cleverly harmonized singers personalize the poetic lyrics while stretching the songs with hocketing pitch variations. One standout passages occurs on La disparation est un mur de plus when the nearly vibrato-less parlando of one vocalist is cushioned by clarinet harmonies. During some pure instrumental passages the similarities between trilling reeds and stroked strings is emphasized as mutual tonal expansions appears to be both notated and aleatoric. […] 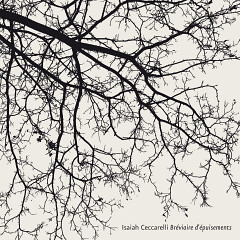 Bréviaire d’épuisements
During some pure instrumental passages the similarities between trilling reeds and stroked strings is emphasized as mutual tonal expansions appears to be both notated and aleatoric.