Again an irresistible work I have reviewed several other CDs by Berthiaume for Vital Weekly. The continuity in his releases consists in choosing for each release a new musical direction. Earlier works embrace his improvisations with Bailey and Frith. Also he made CD of very accessible easy listening jazz, etc. He seems to feel at home in many different musical contexts. So I’m always curious what will be the next step by Berthiaume. With Small Tease he shows his affection for folk music. For those who know his western-folkgroup Rodéoscopique, this will be no surprise. Small Tease is again a very accessible music, albeit thoroughly constructed and played with great skill. The CD counts 11 pieces. Five of them feature Berthiaume playing solo guitar, dobro or banjo. The other six pieces are for different line ups, with drummer Stefan Schneider, Rémi-Jean Leblanc on doublebass, Rick Haworth on pedal steel, and a string trio with Jennifer Thiessen, Améline Chauvette Groulx and Erika Donald. 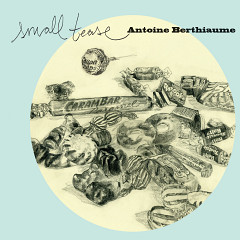 Small Tease
He seems to feel at home in many different musical contexts.