Derome, in deadpan delivery, described the tunes as a suite dedicated to the mundane incidents of life on the road, with titles like Nez qui coule and Cogné de genou.

Dostaler is a very deliberate player in every comping phrase and every line. It took a while before Tanguay unleashed his irreverence in the solo of Prières. Cartier sang La grenouille et le boeuf admirably in a trembling baritone and his electric bass allowed for a sustained, almost post-rock undertone to Nez qui coule. Walsh often relied on glissandi and extreme high register, often complemented by a plunger. Derome, on alto and soprano saxophones and flute, played with a fairly clean tone, marked by intentional spurts of overblowing and other extended techniques.

Compositionally, the pieces featured some intriguing structures — the Berg-like stacked tone row of La grenouille, the intervallic unisons of Nez qui coule. The blend between Walsh’s trombone and Derome’s alto was especially notable. The centrepiece of the set was Prières (based on Protestant hymns), with the horns in harmonized chorale, the cued repeated figures for Tanguay’s solo, and splitting the band into two time feels. Throughout the show, it was all very interesting but the spark was lacking — perhaps that was part of the tribute to the mundane as well. 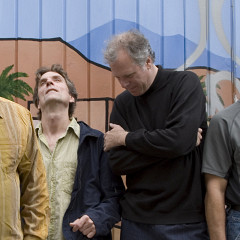