Finally, a new record from Fanfare Pourpour! The bar is very high after Karusell Musik, their splendid collaboration with Lars Hollmer. Danse des breloques brings us back closer to Le Bal, with Jean Derome and Némo Venba sharing artistic direction duties, and several members contributing compositions. A very elegant, charming and sensual record, less crazy than Karusell Musik, perhaps a little less cerebral than Le Bal. Simple and moving melodies, suave and rich arrangements. Worth noting are the songs Immense bricolage (written and sung by Derome) and Partir (written and sung by Luc Proulx), along with Pierre Emmanuel Poizat’s title track and Le retour de Pelle (a tribute to Hollmer), and Pié grande, a contribution by Pourpour’s latest addition: saxman Damian Nisenson. Danse des breloques might be a tad bit to sedate for its own good, but I won’t be sure until several more listen — first I need to get to know it as best as the previous albums. 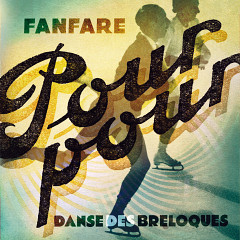