A quick perusal of Canadian pianist Marilyn Lerner’s website presents a musician whose projects are both typically and atypically diverse. Usually range demonstrates itself in working with a large pool of other musicians; Lerner certainly has that, whether it is with the long-standing Queen Mab to the two trios under discussion here. But she also cuts a wide swathe stylistically. Her website discography is split amongst Improvisation, Jazz, Classical, Jewish Music and Audio Art. None of these are affectations; her playing in any context is sincere and persuasive.

The trio Ugly Beauties is obviously a Monk tribute band, right? Well, yes and no. When this reviewer saw the band at last summer’s Vancouver International Jazz Festival, they did play a couple of his pieces. But for their eponymous debut recording, there are none, the music coming from the pen of each member or as duo or trio collaborations. And even Monk would be somewhat taken aback at the European-style openness of the playing though he would appreciate the brevity of the 15 tracks (55 minutes in total, with only one tune hefty at nine minutes). Fellow Canadians Matt Brubeck (cello) and Nick Fraser (drums) are the other two sides of the equilateral triangle and both have a breadth to their resumés that equals Lerner’s. Thus Ugly Beauties may be a jazz record but one that is quite brash in revealing the layers of other musics integral to jazz’ vitality. The spirit of Monk is far better served by a group that uses his individuality as inspiration rather than retreads his music for the 1000th time, though Ugly Beauties probably would do it better than most. 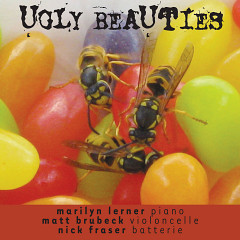