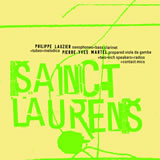 Sainct Laurens
The nine tracks range from lyrical showcases […] to abrasive and gritty scrapes, squeaks and flanges from Martel’s extended strings that contrast with intense, horizontal split-tones from the saxophonist.