Recorded in Europe in 2006, and finally out on Ambiances Magnétiques, this is the first (?) collaboration between two turntablists, Montréaler Martin Tétreault and Berliner Ignaz Schick (of Perlonex, who will be performing with Charlemagne Palestine at FIMAV 2010). Sixty minutes of textural improvisations on turntables, objects, and surfaces. Each participant is tucked in his own stereo channel, which makes it easier to identify their similarities and distinctive traits. And for those wondering, Live 33 • 45 • 78 is just as noise-based but a lot less noisy than Tétreault’s recent collaborations with Otomo Yoshihide. Abstract, demanding music, but it carries just fine. Note that Schick will be in Montréal in March. 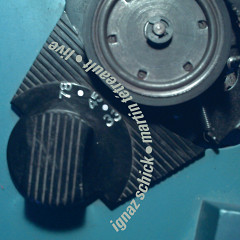