It’s common, although not common enough, for the great bassist and bandleader Charles Mingus to be granted revered composer status in the jazz canon. The efforts of his widow Sue Mingus have kept the man’s name alive and music vital in the 30 years since his death but it’s rare to hear projects that seem to pinpoint with such precision particular moments in Mingus’ career as do recent tribute CDs by the Berlin quartet Dok Wallach and Montréal’s Normand Guilbeault Ensemble.

Bassist (and worthy crooner) Normand Guilbeault led his small-in-number-large-in-scope big band through a set of the big man’s songs on 2005’s Mingus Erectus and ratchets them up to a sextet for Hommage à Mingus with the addition of pianist Normand Deveault, further fleshing it with guest vocalist Karen Young on two tracks. Guilbeault might be the strongest jazz classicist in the eclectic Ambiances Magnetiques collective and is a smart arranger who gets a remarkably big sound out of his group. Which means that, while the lineup might be closer to such classic Mingus albums as Ah Um or Blues & Roots, it’s less a soloist’s session than an arranger’s album, more like the fisherman’s wife’s shoes than her orange dress, if you get my drift. Their take on the little noticed Passions of a Woman Loved, from the 1957 album The Clown, even bears some resemblance to Mingus’ final big band works. Undercutting that point, however, is the mighty baritone sax of Jean Derome; his defining of Prayer for Passive Resistance alone makes good on the sticker price. 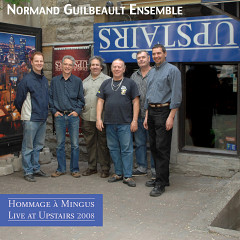 Live at Upstairs 2008
Undercutting that point, however, is the mighty baritone sax of Jean Derome; his defining of Prayer for Passive Resistance alone makes good on the sticker price.