Pierre Labbé first appeared in the catalogue of Ambiances Magnétiques in 1999 on two releases. On one as a member of Les Projectionnistes, on the other as part of Papa Boa, a quartet of Bernard Falaise, Rémi Leclerc (Miriodor) and Frédéric Roverselli. In 2003 he returned with his Ensemble Pierre Labbé for his first real musical statement: Risque et pendule. A sextet interprets nine stylistic diverse compositions by Labbé, again with guitarist Falaise as one of its members. Now we are once more six years ahead in time. This time Labbé (tenor sax, flute) formed a quartet to perform his newest compositions: Bernard Falaise (guitars), Clinton Ryder (bass) and Isaiah Ceccarelli (drums, percussions). This release perfectly fits in the long tradition of Ambiances Magnétiques of combining rock and jazz elements in the format of avant rock-like groups. Discussions whether it is more rock or jazz in the end or fruitless. Both languages are interwoven in a very organic way by Labbé, implying that is meaningless to seek for the moments where rocks ends and jazz starts. This atypical music that integrates so many different musical aspects and traditions, is on the other hand very together and undivided. This has to do with the strong handwriting of Labbé as a composer, and the dedicated performance by the group. The music ranges from almost spiritual pieces like the opening track Pour le Moment to very rhythmic complex exercises as Manivelle. Matos belongs also to this last category. But this piece is at the same time an example of how Labbé reserved space for free collective improvisation. In many of the pieces there is much room for guitarist Falaise, for his surprising and inspired playing. No surprise Falaise is asked and involved in many initiatives nowadays. Hope it will not take another six year for a new album by Labbé and his mates. 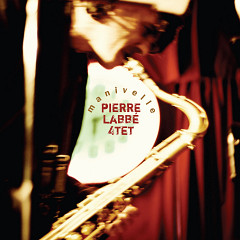 Manivelle
Hope it will not take another six year for a new album by Labbé and his mates.