Divided into two works (Partie un, Partie deux), this “Polaroid of the Saint Lawrence River” is the result of the quartet’s meanderings, ambience collection (see the cover for the most outrageous microphone in existence) and attempt to interpret the otherwise soul of, as Native Americans named it, “the river that walks” during a tour of locations near the tributary. The crew begins with a deliberate prelude of low-register piano, snare smacks, metallic pings, alarm bells, a somber violin melody, bird calls and waterfall snippets before boarding a gentle boat ride at the four-minute mark: waves lap, wood creeks and (presumably) the captain remarks about the ride (warning the passengers of potential capsizing, at one point). Off in the distance, a ringing church bell cues casual violin fragments, and one by one the group accompanies the dictation. Arriving on the shore and finding construction and big city rumblings, Lacasse and Massicotte adapt with a bustling accordion/violin duet as the “traffic noise” transforms into a supple, pitched drone. Suddenly, we’re back at the beach: a sampled sand march sets a pulse as Lacasse revisits her piano, feverishly arpeggiating, while Normand bangs on whatever he can find until a niente. Though sonically fiercer at some points, Partie deux is similar — and just as alluring — in its aesthetic construction: a number of juxtaposed vocal conversations and musical narrations, elide, skirmish and crash; the piece folds like a palindrome and offers a few minutes of peaceful, beachside sea surf. As the tide recedes, the quartet slinks into a cabalistic witch’s brew, a curious coda rife with extended vocal techniques (i.e. operatic grunts, barely-attained high note screeches, growls, a chest-bursting howl scarily reminiscent of Ol’ Dirty Bastard’s on Goin’ Down), mellifluous bass chords and echoes of the melody heard 43 minutes ago.

As you might notice, this disc is not a haphazard mélange of lazy, point-record-print field recordings where the nature of the objects trumps musicality — nor is it a complete man-made digital divorce of the source from its inherent qualities and associations. The artists took care when balancing these two extremes with the most intriguing aspect of the pieces: their own mingled performances. Face à la dérive is evidence that the best documentaries are even better when they feature the documentarian(s). 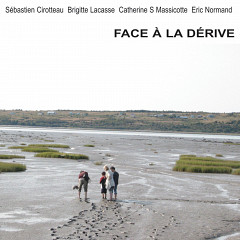