A look at the most recent Ratchet Orchestra performance, and for good measure, a history lesson on the project led by Nicolas Caloia.

Anyone familiar with Montréal’s “musiques actuelles” scene should already be familiar with Nicolas Caloia. The bassist and sometimes cellist is a member of multiple projects such as FReC – a trio with Lori Freedman and Danielle Palardy Roger – and the Murray Street Band. Moreover, he can frequently be heard and seen as part of ad hoc improvising groupings. On the other hand, very few people know Nicolas Caloia for his own projects. The reason for this is very simple: in past years, Caloia has presented those on a handful of occasions.

On June 24th, the Ratchet Orchestra performed at La Sala Rossa as a 26-piece band. The orchestra was made of a string section – two violins, two violas, two cellos and Caloia’s double bass, a 12-piece reed and horn section ranging from sopranino saxophone to sousaphone, two electric guitarists, one pianist and four percussionists. The personnel itself featured some of Montréal’s most active musicians such as Jean Derome (flute and alto saxophone), Sam Shalabi (guitar) and Gordon Allen (trumpet), some well-established, but infrequently seen figures like Guillaume Dostaler on piano, Norsola Johnson on cello and Bruce Cawdron on glockenspiel, claves and other percussion, but also some who perform infrequently such as Thea Pratt on French horn or Ken Doolittle on percussion.

The Ratchet Orchestra interpreted some compositions of Caloia in addition to Sun Ra originals. The music performed showed the specificities of Caloia’s approach to orchestral jazz. Indeed, from the traditional big bands to the London Improvisers Orchestra by way of the Sun Ra Arkestra and William Parker’s Little Huey Creative Orchestra, the history of jazz and improvised music has seen many large ensembles and as many different conceptions of the orchestra. Yet, the concert proved that the Ratchet Orchestra has an identity of its own. First, the songs are based on melodies. However, one song will sometimes incorporate two or three melodies played simultaneously by the ensemble. For example, the end of Soak featured the reed and horn section playing a melody while the strings played a different although complementary progression. Second, the music leaves a lot of room for solos. However, the pieces are not organized around a succession of solos. Some large ensemble will start with a theme after which the rhythm section will establish and maintain a pulse over which various solos will happen. In the Ratchet Orchestra, a musician rarely solos over the rhythm section. There is usually something else happening: the strings will punctuate the rhythm, some subset will play a melody in the background, etc. For example, Jean René’s viola solo in T(h)rust built up into a crescendo that involved the whole orchestra. Third, Caloia has found a good way to mix composed and improvised moments. Indeed, the improvisational dimension is not restricted to the solos in that some compositions present some free sections.

The main criticism one could formulate relates to the pacing of the concert itself. One long 80-minute set instead of two sets, as they did on June 24th, might have worked better. Indeed, the first set ended on a high note with Wish and T(h)rust, two pieces whose finale feature all 26 musicians playing at high power. The 30-something minute intermission interrupted an “air d’aller” the group had acquired by the end of the first set. At the beginning of Tiny Pyramids, the piece that opened the second set, it was obvious the Ratchet Orchestra had to gain back its focus. Let’s say things were a little looser… The same applies to the audience who had to get into it again.

For those who missed the concert, but would like to hear the Ratchet Orchestra, a CDR was recently self-released by Nicolas Caloia. Entitled “Live at the Sala Rosa [sic] November 28, 2007,” it features, as one can easily guess, most of the concert played by the ensemble on the given date. It might be the next best thing to hearing the 26-piece ensemble from a few meters… until the next Ratchet Orchestra concert of course! 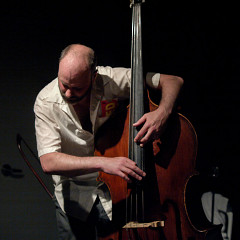