Remember that afternoon on the beach just a few months ago? The flash of sunlight on water, the feel of hot sand under your feet, the tang of lemonade on your tongue. Chances are the sounds of children laughing and icecubes tinkling will come to mind last, if at all. Why does hearing so often take a back seat to vision or taste? Have we been suppressing unwanted noise for so long that we have dulled our capacity to hear? Vancouver-based composer Hildegard Westerkamp offers our ears a wake-up call, reminding us that sounds are as much a part of place as images and smells.

Westerkamp records whatever reaches her microphone in a particular place and then transforms and combines those sounds electronically. Her “instruments” include everything from creeks and ravens to truck brakes and train whistles. “I transform sound in order to highlight its original contours and meanings,” she says in the extensive liner notes of her CD Transformations. “This allows me as a composer to explore the sound’s musical/acoustic potential in depth.”

If you are thinking “Solitudes” music, you’re on the wrong track. The first composition on the CD, A Walk Through The City, explores the sounds of Vancouver’s Skid Row’ carhorns, jackhammers, voices. Although perhaps the most challenging of the five works on this recording, it captures the beauty and complexity even in those sounds that we often try to filter out.

In Kits Beach Soundwalk the “intimate sounds of nature” like clicking barnacles and sucking mussels are set against the pervasive hum of the city, blurring the line between nature and non-nature. Beneath The Forest Floor offers an opportunity to experience the deep peace that the composer felt while recording the sounds of BC’s Carmanah Valley.

Cricket Voice emerged from a Mexican desert region called, strangely enough, the Zone of Silence. The cricket’s high-pitched trills become the desert’s heartbeat when slowed down in the studio. Cacti spikes, dried up roots, and the echoes of an old water reservoir provide the instruments for background percussion.

Westerkamp thinks of sound as a part of ecological systems and is careful not to overmanipulate it. “I feel that sounds have their own integrity and need to be treated with a great deal of care,” she says. She also recognizes that her compositions, played far from the places in which they originated, become part of another “soundscape.” Indeed, my dog spontaneously howled through Fantasie for Horns II, adding his voice to those of foghorns, train whistles, and a French horn!

More recently, Westerkamp has been working with photographer Florence Debeugny on At the Edge of Wilderness, a sound/slide installation about ghost towns left by industry in BC. It opens as part of a larger exhibition on September 8, 2000 in Vancouver. She also travels widely, giving workshops, lectures, and concerts, and she plans to put out a double CD in the next year with works based on her experiences of India. 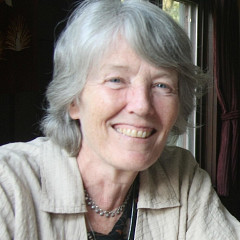 Hildegard Westerkamp
… captures the beauty and complexity even in those sounds that we often try to filter out.