I’ve written a little here before about my interest in the music of the Wandelweiser label, and as I’ve played a few of the recent releases over the last few days I thought I’d write a little about some of the more recent releases I’ve managed to pick up. I rarely see reviews of Wandelweiser discs anywhere so over the next couple of weeks I aim to do my little bit to help put that right. Here’s a great one to start with:

Listening to this music today has come almost as a shock to the system after my recent obsession with Shostakovich and Mahler. In the brief sleeve notes to this disc Frey mentions how he was influenced by the painting of Agnes Martin whilst writing his first String Quartet in 1988, which appears here as one of four works recorded by the Bozzini Quartet in 2004. Frey draws a parallel between his music and Martin’s minimal paintings: “clear-cut forms not overgrown with rhetoric and figuration. Instead sensuality, radiance and intensity gripped the entire space”

At first, after the rich, in-your-face emotions of Shostakovich and Mahler this paired back minimal music is hard to come to terms with, but very soon its immense beauty grabs me, almost halting me in my tracks and bringing everything I do down to a slow, quiet pace. That may seem a dramatic statement to make, but when the CD began I was putting away a pile of clean washing, and after a few minutes the clothes were left in a heap in front of the open wardrobe and I sat quietly listening.

Its hard not to mention a similarity with Feldman’s second quartet when considering the first Frey SQ on this disc. The simple structure of the music consists of repeated two note passages that change every thirty seconds or so, mostly bowed softly, with some plucked strings appearing later in the piece. There are subtle changes in the notes played. A cursory listen may suggest the same notes played in a basic pattern over and over, but there is a gentle shift throughout. Here the similarity with Martin’s painting is clear to me, an apparent simplicity containing a deeper intensity and detail revealed slowly over time in a manner not unlike the work of Morton Feldman. The composition has a distinct Feldmanesque feel to it, a sense of gradual movement across the music rather than any more obvious progression. The piece is played slightly quicker than you may expect from Feldman however, and lasts just short of eleven minutes, resulting in a beautiful miniature that I rather wish went on for longer.

The second piece on the disc is named (Unbetitelt) VI (I suspect this translates as Untitled, but Babelfish won’t confirm as such) Written between 1990 and ’91 the music inhabits similar ground, here utilising slowly rising musical figures slowly played in a clean, simple fashion, but again creating the feeling of gradually shifting movement as the ninteen minute piece progresses. Often we only hear a single instrument, and each note is separated cleanly from the next, sometimes with a momentary silence. Only late in the piece does a passage appear where a high note is held for an extended period as other instruments continue below, but there is a real clarity to this music that is maintained throughout. There are a couple of surprises here and there, just before the midway point a violin picks out a few lines of almost inaudibly high sound, yet these frail whispers fit perfectly into the music.

The third and fourth tracks on the CD make up the two parts of a very short work entitled Zwei allerletze Såchelchen (No idea again beyond the “two” at the start, help me out German readers! Tomas?!) The first of the two pieces, Mailied (May song?) is just 47 seconds long. As brief as it is the piece is songlike in its existence, consisting of twenty or so high pitched notes softly overlapping each other in a brief moment of beauty that slips away as fast as it arrived. The second half of the work is half as short again at just 21 seconds. Vorbei, (Past) resembles the opening to a more traditionally notated quartet, Shostakovich naturally comes to my mind, but the tiny piece just ends after ten or eleven elegantly arranged notes, a tiny glimpse of something very beautiful, but the listener is left wondering. Zwei allerletze Såchelchen was written at the same time as (Unbetitelt) VI, in 1990. I cannot help but draw more parallels with Feldman’s experiments with the length of a piece of music, with Frey here distilling great beauty into a tiny opening in time, whilst Feldman’s later works stretched themselves over several hours. Both approaches challenge our established listening conventions. With these brief pieces how is the listener meant to respond? My natural reaction has been to hit the “<” button on the CD player and play each of the pieces over and over, but was this the intended response? Does it matter?

The final piece on the disc is simply entitled String Quartet II and was written the best part of a decade later between 1998 and 2000. At nearly half an hour in length this piece is the longest on the disc, and addresses very different concerns to the earlier works. Here Frey uses extended techniques to create a very quiet, soft, almost noteless grey soundworld within which brief passages of bowed sound exist for two or three seconds, each interspersed with a second or two of silence, but again with the sounds used gradually shifting across time. This is hauntingly beautiful music. The playing resembles an ethereal vocal ensemble more than it does a string quartet. The opening to Ligeti’s Lux Aeterna springs to mind, but even that isn’t so close. You can certainly forget the Feldman comparisons here, this music takes a further step into inaudibility and a leap away from the musicality of the ealier pieces. For me this music moves closer to the Agnes Martin paintings, utilising the faintest of sounds, whispers of immense beauty, changing with every movement of the bow yet structured in a manner that careful listening reveals the natural rhythms of the piece.

One of the most common criticisms made of the Wandelweiser collective of composers is that the music they create lacks humanity, existing as a sterile exercise in mannered austerity. This may be true of some of the work, but this album in particular is achingly beautiful and is dripping with the intensity and sensuality created by a group of musicians playing difficult music with great passion. This music, and the final piece in particular has a cumulative effect on the listener, slowing the senses, heightening the attention, filling the space with the radiance Frey finds surrounding Martin’s painting.

I think you can tell I really liked this release. 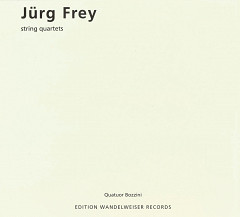