Inspired by jazz standards, Pierre Cartier tackles the theme of love. With all the lyricism such a quest deserves, he combines the voice of Quebec’s poets with the energy of new jazz. […] I caught Pierre Cartier’s ensemble performing this music on two occasions, once at Guelph and more recently at the Victo Fest. I liked it the first time, but found it even better the second time around. I was pleasantly surprised to hear Mr. Cartier singing on all of these pieces, something I didn’t know he did, after hearing him play some great electric jazz bass with Jean Derome in the past. For this disc, he has put together a truly fine Canadian sextet, all either leaders or at least great veteran players on their own. It is a unique frontline with alto sax or flute, trombone, viola and electric guitar with Cartier’s charming voice at the center. There is something quite lovely, melancholy and touching about the sound of Cartier’s voice, as well as the music surrounding his voice. Although I only know a small amount of French, there is still a universal feeling that reverberates at the center of these songs. What stands out is the various solos from Jean Derome (alto sax), Tom Walsh (trombone), Jean Rene (viola) and Bernard Falaise (guitar), that are an extension of the feeling generated within each song. It is the most lyrical playing I’ve heard these men, who are often associated with more “progressive” types of music. At times, the arrangements are quite crafty and rather progressive in more subtle ways. No doubt that some folks will complain of having to listen to Cartier’s most affective and often forlorn voice, yet I find that it often rings true and touches something quite human in all of us who can still be moved by the sound of the human voice reaching inside and touching our hearts. Whenever I get close to cringing at the occasional corniness, one of those cats takes a solo that makes me smile and feel good to be alive. 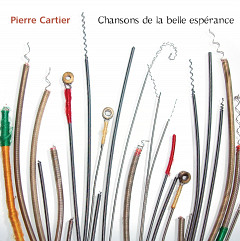 Chansons de la belle espérance
I caught Pierre Cartier’s ensemble performing this music on two occasions, once at Guelph and more recently at the Victo Fest. I liked it the first time, but found it even better the second time around.