Dan Lander is, I think, predominantly a radio artist. He has participated in numerous international broadcasts and has filled radio editorial and jury posts in Canada and Europe. I have only heard one other work by him which was on a Nonsequiter / RadiusCD. It was cleverly constructed from the manyvarious ravings and rantings which bombard late-nite American radio/tv audiences. (Sorry I’m a bit vague on all this, but I did not keep a copy of it, which in retrospect, was a bit silly of me.)

The man’s obviously produced bunches of other stuff too, however I have not encountered any of it during my foraging expeditions.[empreintes DIGITALes has released , IMED 9526 in 1995.] There are four tracks on this 10” vinyl record. — one on one and three on the other. The long composition is titled The Road Belongs to Everyone and I found it a somewhat unpleasant reminder of countless lost hours stuck in traffic on hot days when everyone seemed to be glued to their carhorns and nearby a couple of stoned kids with eternity stretched out in front of them thought it was the hoot of the day. The flipside contains three pieces which focus on the human voice. The first track sounds like an audience applauding a street performer in ever-increasing waves responding to the same activity, in the next sentences are reconstructed from single words and phrases and tell truths originally disguised with media rhetoric. The last track starts with a rumbling kittypurr which serves as cooling counterpoint to the dance of the kitchen machineries. Not an everyday event, but certainly one which will slip neatly into a collage salad. 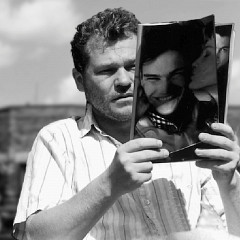