Two canadian guitar improvisors joined hands once again. As a duo they play since 1995 and in 2000 it was time for their first duo-recording for Ambiances Magnétiques. Arthur Bull is a veteran from the canadian improv scene and played with Michael Snow, Paul Dutton, John Oswald, etc. As a poet he published three books. Heïkalo is an improvisor and composer. He also runs his own label: Heïkalo Sound Productions. Having a look in this catalogue learns that Heïkalo released many solo-albums that show his interest in a diversity of strings instruments and also in electroacoustic music. This label released also the second duo-recording of Bull and Heïkalo. So with Concentrés et amalgames were are listening to their third collaboration. Bull plays electric and prepared guitars and e-bow. Heïkalo we hear on acoustic and classical guitars, but also on drums and percussion. The album features six guitar duets and five duets for guitar and percussion. In their playing they show a great togetherness that results in great music. Improvised music at its best. Both gentlemen speak their language of free form and non-idiomatic improvising very well and give way here to some very communicative and musical interaction in the classical Derek Bailey-style. 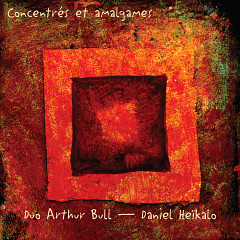