Montréal’s Ambiances Magnétiques has been busy with releases as of late — see new outings by Tim Brady, Lori Freedman, as well Arthur Bull & Daniel Heïkalo for evidence. Now you can enter Gianni Lenoci: an Italian pianist with an impressive touch.

The piano leader has recruited some finely plucked Italian musicians for this oeuvre, which travels nine selections of extremely diverse territory. As the story has it, these tracks were born out of the new teaching methodologies’ workshops given by Lenoci at Nino Rota Conservatory in Monopoli. But just when you start to think most of this collection is centered around Lenoci’s subtle piano meanderings, a track like Intersezione, or better yet Notturno frattale, neatly tuck away those pre-conceptions with nearly 6 minutes of electronic-based shrieks and tonalities, both far away from conventional jazz instrumentation.

Sextant (which I can only guess signifies the number of musicians involved) is Lenoci’s follow-up to Sur une balançoire, also released on Ambiances Magnétiques back in 2004. And this new album takes a lateral sprint from its predecessor.

For lack of better expression, Sextant is “all over the place” — and without a real unified vibe (except, of course, for the “everywhere” factor). The open-minded combination of electric and synthesized keys, electronic blasts, soprano & alt saxophones, double bass and drums results in some fairly eccentric flourishes though. For example, a subtle piano jazz moment can suddenly become intercepted by some manic energy — where various instruments seemingly bubble for distinctive air.

Created with purpose and intent, this is a rather interesting headphone / full sound system experience (though the high-pitched shrieks scared the lights out of me, as they always do). It’s up to you whether or not its disjointed visions merit repeat listening. 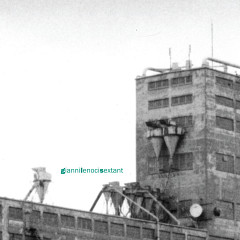