[…] The Feeling of Jazz showcases the work of 3 pillars of the Quebec musique actuelle scene (Normand Guilbeault on bass, Pierre Tanguay on drums and reedman Jean Derome) in a set of swing jazz standards with a modern twist. Derome attacks Ellington, Cole Porter and Fats Waller with a gritty tone and adventurous angular lines while the rhythm section swings freely underneath. The band draws an immediate comparison to Henry Threadgill’s 1980’s group Air, as the trio approaches the tradition with equal parts respect and irreverence. The energy is infectious, but Derome’s awkward swing feel over the prickly groove of the rhythm section starts to wear thin. The saving grace comes as the band gets down and dirty on a Misha Mengelberg cha cha called A Bit Nervous and when Derome switches to flute on Jitterbug Waltz, but then defeat is snatched from the jaws of victory when Derome sings, adding high camp to the already full dance card. 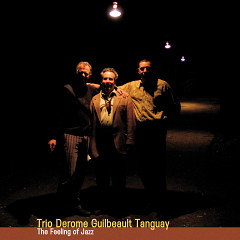 The Feeling of Jazz