When I was asked to dive into DAME’s catalog in search of intersecting points or recurring themes that would sketch discovery trails, the trad connection stood out immediately. Not only because of the importance of traditional folk music in the development of avant-garde music in Quebec, but also because the albums belonging to this line usually speak to us in a more immediate way and are easier to grasp.

It may seem a bit paradoxical, but tradition and innovation often go together hand in hand. When a culture’s avant-garde artists look for ways to overstep the rules of the music industry, they often turn their attention to roots — theirs and others — to find new paths to explore. Traditional folk music often holds at his core treasures of stylistic freedom and improvisation. Furthermore, its festive outlook can make it easier for an audience to accept and appreciate the introduction of new rhythmic, melodic or improvisational parameters. That’s what happened and continues to happen in Quebec. Here’s a listening trail in three parts, three original ways DAME artists approach the tradition: revisited, reinvented, and made-up folk.

Late 1970s: a trad folk revival is sweeping the Province of Quebec, thanks to a new generation of musicians (groups like La Bottine Souriante, Le Rêve du Diable, and L’Engoulevent). Among these groups, many of which recording for the label Tamanoir, is a collective of crazy youngsters, guitarists who deprave reels and folk tunes with their melodic inventions and post-modern poetry. Among Conventum’s regular members are André Duchesne and René Lussier, who will later rank among the founding members of the collective Ambiances Magnétiques (sadly, Conventum’s two albums, À l’Affût d’un complot and Le Bureau central des utopies, are out of print).

In Ambiances Magnétiques, René Lussier has continued to explore a rereading of Quebec’s music history. His discography is peppered with folk tunes stripped naked and dressed anew. On his three albums with Les Granules (a duo with Jean Derome) he exaggerates the Dionysian character of the music (Le Boudin de Noël - or The Christmas Blood Pudding - on Soyez vigilants, restez vivants and La Chicaneuse on Au Royaume du Silencieux rank among the finest examples). With Le Trésor de la langue, he focused on our historical folklore, turning the words of René Lévesque, the FLQ, and people on the street into a new “Cahier de la bonne chanson” (a music book of old folk tunes that rested on the piano of many Quebec families in pre-television days). His recent collaboration with American guitarist Eugene Chadbourne signals a return to these roots — their CD L’Oasis released on Victo presents many revisited tunes from both sides of the border.

The folklore of a nation is not limited to a body of songs, it is also a state of mind, a substratum from which many artists in DAME’s catalog dig to reinvent our traditional folk music (and others too). On La Boulezaille, Pierre Tanguay and Pierre Langevin (masters of many European folk music in the group Strada) mix up traditional and modern instruments in search of a new, “actuel” folk freed from the cage in which all kinds of traditionalists would like to preserve it. Groups like Interférence Sardines and La Fanfare Pourpour shape their original pieces in ways that bring to mind the Devil’s fiddler or street fair music (music of the people, the prime definition of “folk” music). Joane Hétu’s Musique d’hiver doesn’t have that festive side to it, but it nevertheless redefines the folklore of our Quebec winters with much more precision and evocative strength then Nelligan’s famous poem.

Traditional folk music refers to an instinctive form of music-making, music created outside the institutions and their codes, everyday music. And what if one wants to step out of the everyday? There is always the possibility to create folk out of nothing, to make folk-fiction. René Lussier and Robert Marcel Lepage establish their “musique actuelle” - a blend of free improvisation and reminiscences of trad - as the folk music of the future, the last enigma of a dehumanized world. The same goes for André Duchesne’s Les 4 Guitaristes de l’Apocalypso-Bar, the band being presented as trad rockers from the future (a post-apocalyptic future, mind you). And with Bruire’s Chants rupestres, Michel F Côté and his friends attempt to recreate through free improvisation the folk music of prehistoric men. We may have ventured far from the falsely naive tunes of Conventum, but this music still stems from a desire to go back to the roots of music expression. And in the end, there are many ways to call a square dance. 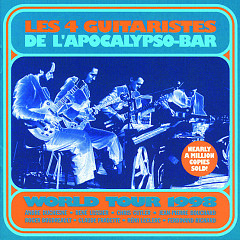