Pierre Tanguay and Tom Walsh appeared on many Ambiances Magnétiques releases before 1998, but mainly remained in the shadows devoted to sidemen. That was until this project, Midi Tapant [Noon Sharp], a surprising half audio art, half free improv album. Tanguay plays the drum set, various percussion (mostly African) and objects. Tom Walsh provides samples and trombone. The key part of this CD resides in the samples: strange soundscapes made of orchestral cues, TV zapping and electronic treatments upon which trombone solos are tacked or to which a sudden drum pattern will be joined, unless ethereal percussion or even toys are added to the mix. Most of the music (title track excepted) is atmospheric and slow-developing. It evokes childhood (toys, but also the title Est-ce que Marie peut venir jouer? [Can Mary Come Out and Play?], or Fred Frith’s film music, especially Middle of the Moment. Midi Tapant foretold somehow Pierre Tanguay’s solo CD La musique de mon disque. If the album received a lukewarm reception, it did however succeed to reveal another side of these two musicians too often taken for granted. The sampling work is a bit crude, but Midi Tapant still makes good music to daydream on. 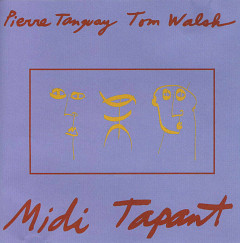