Outstanding new music ensemble featuring six guitarists from Quebec performing the compositions of Mauricio Kagel, John Cage, Claude Vivier, Martin Levasseur and (ensemble member) Francis Marcoux. Montréal-based experimental guitarist Antoine Berthiaume left me with one of these fascinating discs and I am most grateful. I have had a fondness for guitar ensembles since hearing the Four Guitarists of the Apocalypso Bar (also from Quebec) and their sort of offspring, Fred Frith’s Guitar Quartet. As far as modern classical music goes, pioneers like Glen Branca and Rhys Chatham have also paved the way.

L’Hexacorde utilize mostly acoustic and one electric guitar(s), bass guitar and charango. They open and close this disc with pieces by influential composers who are rarely associated with guitars, Kagel and Cage. Mauricio Kagel’s Rrrrrr… is for a cycle of 41 pieces all with titles beginning with “r". It features acoustic guitars played delicately, with slightly twisted folk melodies. Canadian composer Claude Vivier was a rather mysterious figure who studied with Stockhausen and died very young (at 35). Vivier’s piece, Pulau Dewata (“Isle of the Gods" in Balinese), is a fascinating one. Influenced by Balinese music, it is a collection of haunting fragments, intricate and with unexpected twists and turns. Martin Levasseur’s Empreintes magnolia is short, yet a unique in its structure. Layers of sparse acoustic and electric guitars play a series of enchanting melodies that evolve and remain connected as well. Francis Marcoux, who plays electric guitar in this ensemble, contributed “Obstinaton", which deals with tight ostinato patterns played slowly in intricate layers. Cage’s Sonatas and Interludes was written for prepared piano and here is played by prepared guitars, with objects placed between the strings. It is contains the same mysterious, alien, exotic sound that Cage coaxed from his prepared piano. The fractured rhythms sound just right. Closing with Cage’s In a Landscape, a delicate and lovely work, where certain notes are sustained and ring melodic elegance. 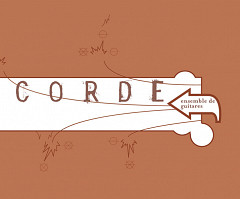 L’Hexacorde
… one of these fascinating discs and I am most grateful.