For 25 year, Tim Brady has been carving a niche for the electric guitar within classical music. Playing Guitar Symphony #1 (Ambiances Magnetiques, 2004) is Brady’s tenth album. Composed largely on electric guitar, it presents his contemporary classical score in five movements for a 15-piece acoustic chamber orchestra.

Brady and coproducer Morris Apelbaum sought to combine the guitar and orchestra with Brady’s guitar samples and textures. “My music is somewhat unusual in its combinstion of acoustic and clectmnic sound sources,” he says. “I compose on the guitar, on the piano, by singing, writing directly onto score paper, or using a sequencer or multitrack recorder. The choice of composing medium depends on what I’m trying to get at.”

Apelbaum and four assistant engineers recorded the Nouvel Ensemble Moderne, conducted by Lorraine Vaillancourt, in Oscar Peterson Concert Hall at Concordia University in Montréal. “We didn’t have to fix the room sound”, Brady says. “The hall is used frequently for recording in Montréal”. Apelbaum recorded the orchestra onto 24 tracks through a number of mic preamps and Apogee AD-16 converters into an Alesis HD24 hard-disk recorder.

The engineers miked each musician individually. “That allowed me to create the final balance in the studio, rather than rely on the conductor’s balance”, Brady says. “Balancing the tone of the electric guitar and sampler with the orchestra was a question of subtle timbral decisions. Even in a live space with no isolation, [multiple mics] give one a lot more control than a stereo pair”. ln addition, the engineers placed each mic 18 to 24 inches from an instrument’s sound source.

Brady brought the orchestra tracks into his personal studio, which indudes a dual-processor Mac G4 running MOTUDigital Performer 3.1 and MOTU2408 audio interface. “I played untreated guitar lines live with the orchestra, and then added the processed stuff later,” he says. “l replaced a few parts with overdubs. Sometimes I didn’t like the mix of the original guitar tone with the ensemble. EQ can do only so much sometimes you have to change pick-ups or even guitars to get the sound that you want.

“All the guitar parts were edited and then reamped in my studio using the speaker simulator on my Koch Twintone tube amp.” Brady says “That added warmth, depth, and subtle tube compression. Tubes offer acoustic attack and decay characteristics, so they blend better with classical instruments.”

Brady recorded and processed guitar samples in his Yamaha A4000 sampler, which he later added to the existing tracks. His TC Electronic Fireworx effects processor also played a key role. “I used just two bands of EQ to bring out the chatacter of an instrument in the mix, Brady says. “With good mics, good preamps, a good room, and great players, you don’t need tons of EQ. I added some reverb and I used DP’s volume curves for subtle volume changes”.

The album concludes with Frame 1—Resonance, Brady’s piece for electric guitar and acoustic piano. “[It features] quite a bit of digital processing, using primarily an old Boss SE-70 effects processor,” Brady says. “The SE-70 has a crude 16-bit sound, but it has some amazing algorithms. The piano plays a dreamlike fantasia part, and the guitar acts like an electroacoustic sustain pedal, taking ideas from the piano and transforming them into an ongoing musical dialogue. I plan on composing more works that I explore the electric guitar in a small, intimate chamber-music context—if all goes according to plan.” 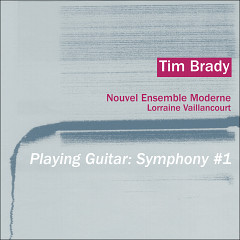 Playing Guitar: Symphony #1
For 25 year, Tim Brady has been carving a niche for the electric guitar within classical music.